Ten areas where the UK and Germany could agree on Europe

The political repercussions of the recent EU budget agreement – when London and Berlin stood on the same side and Paris took itself out of the game – are still reverberating. Yesterday, Former French Environment Minister Jean-Louis Borloo told French r…

European press on the EU budget deal: Behold the birth of the Anglo-German axis 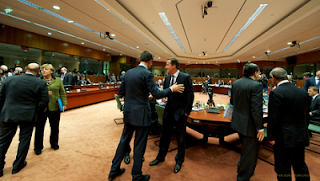 The agreement on the next long-term EU budget (which we analysed here) has been extensively commented on by newspapers across Europe. The main political story was clearly German Chancellor Angela Merkel siding with David Cameron, rather than French President François Hollande – which ultimately made the balance swing towards the group of member states calling for further cuts to EU spending.

We have written about the need to cultivate the Anglo-German axis (particularly in light of Hollande’s election as French President) several times in the past – see our recent analysis of David Cameron’s EU speech, this letter we wrote to the FT, several articles in the Telegraph – and many other places. While Merkel’s decision to side with London shouldn’t be overstated – this is a pendulum after all – it was interesting to note the reaction in the European press.

Die Welt‘s Foreign Editor Clemens Wergin saysthat even though the EU budget has been reduced for the first time in history, the big chunk of money earmarked for farm subsidies “remains the symbol of the backwardness” of EU spending. He also notes, “The UK does not stand on the margin of the EU anymore, but proved to be an important ally of the Germans.”

Süddeutsche Zeitung‘s Brussels correspondent Martin Winter points out that the fact that other EU leaders made an effort to satisfy Cameron’s demands show that “the EU wants to keep the British at its centre.”

FAZ‘s Brussels correspondent Hendrik Kafsack arguesthat the new EU budget “does not deserve the attribute ‘modern'”, as most of it’s still spent on agriculture and structural funds in Southern member states.

Die Welt‘s Brussels correspondent Florian Eder and Silke Mülherr notethat together “Cameron and Merkel were able to enforce an austerity budget [on the EU]”, while the paper’s London correspondent Thomas Kielinger saysthat “Angela Merkel is the trump card in the British hands.”

Der Spiegel Online‘s Carsten Volkery describes the deal as “a triumph for the budget hawks” noting that “the [German] Chancellor backed Cameron and covered him against attacks” from Hollande and other leaders.

“French President Hollande explicitly positioned himself as the leader of Southern Europe [at the EU summit]. That makes it even clearer why it would be undesirable for the Netherlands if this other historic event – the exit of an EU country – were to happen. Without Great Britain, the balance of power between North and South within the EU would be disturbed.”

From a French perspective, Cameron and Merkel fighting side-by-side in Brussels is far from good news – as it means that the Franco-German axis is under pressure. Le Figaro‘s Brussels correspondent Jean-Jacques Mével says David Cameron hit a “master stroke” at last week’s summit. He writes,

“A man can take credit [for the cut in the next long-term EU budget]: David Cameron, whom many saw as already marginalised within the EU, following his decision to ask the British by 2017 whether they want to stay in the [European] Union or not. On the contrary, he goes back to 10, Downing Street, as a winner – for the frustration of French and Italians.”

Interestingly, he also notes that the talks have confirmed the “paralysis” of the Franco-German axis.

“Budget talks have been held hostage by a country, the United Kingdom, which is not sure that it will still be part of the [European] Union tomorrow. David Cameron had come to sabotage Europe’s general interest – and he managed to do so. Noted. But, in this case, let’s get to the bottom of things: given that the club at 27 is doomed to powerlessness, strategic reflections need to happen at the eurozone level. Yet, one would need to repair [France’s] relations with Germany for that. Because this is the other lesson from the Brussels drama: the Paris-Berlin axis is not responding anymore.”

“The pro-rigour Germans, in agreement with the British for once – the Berlin-London axis has in fact replaced, at least on this occasion, the traditional Berlin-Paris axis – and with the help of some Nordic countries, have pushed through the principle that the EU budget can be cut too. The word ‘austerity’, so far unknown, will start hovering over Brussels [EU] buildings.”

“The EU seems distracted. It walks between the old and the new regime…In the midst of this paralysis, Berlin (with London’s support) accumulates power, and a withdrawal towards the national or the intergovernmental [level] is noticed. And austerity policies remain firmly installed in the driving seat.”

And now a voice from Poland. According to Dziennik Gazeta Prawna, the outcome of the EU budget summit is proof of “a substantial shift in the balance of power in Europe”, with France, once the most influential country of the Union, “finding itself on the defensive”. Interestingly, the paper argues,

“The Union will head towards the free trade zone dreamed of by the British and supported by the Germans rather than the ‘solidarity-driven federal structure’ wanted by Paris…There is no doubt that, by imposing cuts, Germany has shown its economic strength. Berlin’s dictate will be even harsher, while abundant transfers from Brussels may turn out to be only a nice memory if the Franco-Spanish-Italian-Polish club fails to improve its competitiveness.”