The BIS Basel Committee has today released its assessment of the EU’s (and the USA’s) implementation of the Basel III rules on bank capital and it does not make good reading for the EU. They key findings of the report are (as detailed in the press release and the graphic below, click to enlarge): 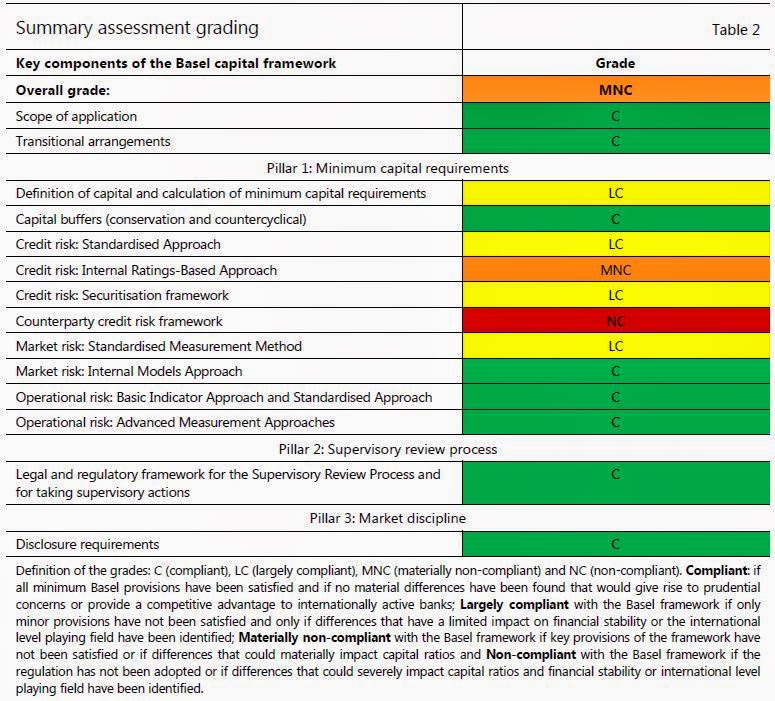 The European Commission’s response can be found here, while there is also a response section following the executive summary in the main report. The EC claims the EU’s approach is “particularly ambitious approach, unique in the world”, which is true to an extent given the diverse nature of national banking systems. The response notes that some changes are already in the pipeline, but largely challenges the interpretation which the Basel Committee makes of the rules. On the whole it is not entirely convincing but then, since the Committee cannot force the EU to change, it seems the Commission is largely happy to ‘agree to disagree’ on a number of areas.

While all of this may seem rather mundane and technical it does have some important implications.

First off, it raises questions about the quality and thoroughness of the recent ECB and European Banking Authority stress tests. We, along with plenty of others, have already raised concerns about this and the report adds further weight to those concerns. Furthermore, the specific problems outlined would certainly have helped present European banks as having higher capital ratios largely by reducing the perceived riskiness of certain assets they hold.

A report by Yalman Onaran for Bloomberg earlier this week highlighted the problems relating to the use of banks internal models to weight risk by contrasting this approach to that of using the pure leverage ratio. As the article notes, under the leverage ratio approach 12 large European banks would need to raise a further €66bn in capital. While neither approach is perfect, the Basel Committee’s indictment of the bank’s internal models and the way a large number of exposures in a number of sectors are valued seems to support such analysis and criticisms.

The second important implication is that is once again clearly highlights that the EU probably remains the more important level of policy making and legislation than international level or international organisations – at least when it comes to how things are structure on the ground.

Despite agreeing to follow the Basel III rules the EU is the one that designs and implements the specific legislation. In this case it has clearly altered the rules significantly to suit its own needs – the gap with the original rules as well as how they are interpreted and implemented in other jurisdictions is clear. Furthermore, while the Basel Committee can issue a damning judgement of the EU’s approach, it cannot force it to change. In this relationship all the hard (legal) power lies with the EU. This also extends beyond just implementation to interpretation. Despite writing the Basel III rules the Basel Committee is not even able to guarantee primacy on how they should be interpreted as the EU’s response to the report clearly shows.