What impact will Cameron’s EU free movement changes actually have on the ground?

We’ve laid it out in our response today, but in an attempt to elucidate things we’ll go into a bit more detail in this post. In addition to the general ‘fairness’ discussion – making sure that there’s a link between what people put in and what they take out – the debate is now centred on the practical impact of the proposals.

In a twitter discussion we had last week with Michael O’Connor and Jonathan Portes on the number of EU migrants effected by these sorts of curbs, they seem to claim that around 10% of “Eastern Europeans” will be affected. The conclusion they seem to draw is that the proposal won’t make that much of a difference.

To reach that figure they seem to simply take the percentage of Eastern European’s claiming benefits in 2013 – it does not seem to be based off the data over four years or compared over time to see if this snapshot is representative. The data available is unfortunately pretty bad, but there’s enough data to look over time, rather than a single year.

As we have laid out in our response today, we think these measures will hit between 14% and 16% of total EU migrants – one in seven EU migrants. This is shown in the table above and taken from the average of the final four years percentages in the graph below.  As we have noted before, its obvious and logical that the longer migrants stay in the UK the more benefits they claim (as they have more children etc) – but from that it’s hard to draw the conclusion that the impact is insignificant. 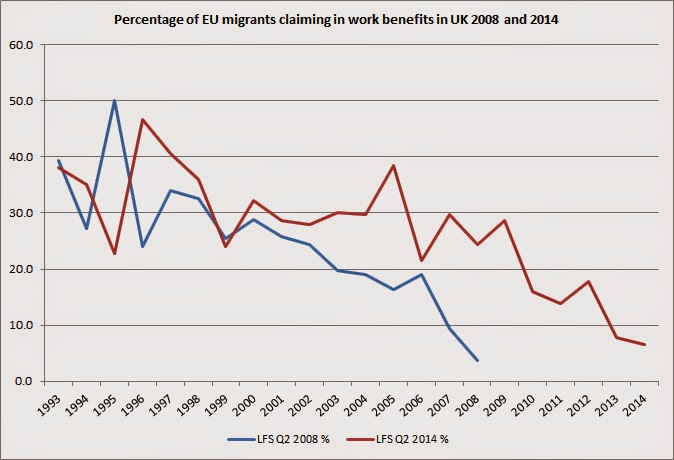 As a share of gross flows (shown in graph below) this will likely impact around 100,000 people over the four year period. This is based on flows from the four years before 2008 and 2014. 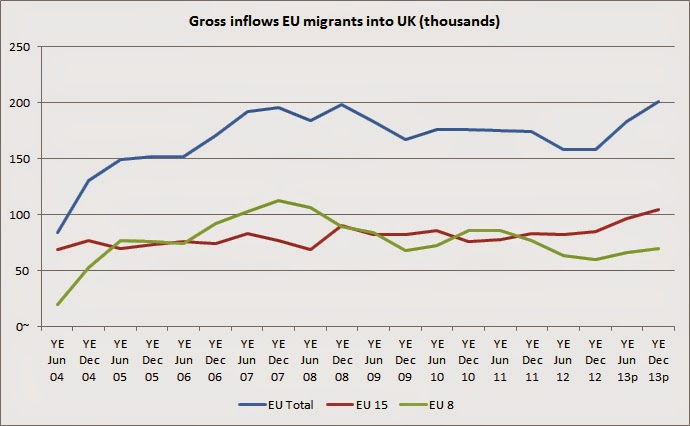 If, however, you want to target the one area that seems to be of the most concern to the UK with respect to EU migration – the low-wage sector – then 100,000 over four years matters. This number will be largely at the low-wage end of the labour market – since these are the workers that claim significant amounts of in work benefits. In other words, as we’ve said all along, this is a targeted policy, intended to take away the de facto taxpayer-backed subsidy to perform low-paid jobs which does not exist in most other EU countries.

It’s impossible to put a firm number on how many people will decide not to come due to this measure. We’ve provided plenty of figures showing how this would take away the incentive in many cases to move from a minimum or an average wage in some parts of Europe to a minimum wage in UK, using in-work benefits as effective top-up, in turn making the move financially attractive in the first place. In other cases the de facto income gap between the sending state and the UK will be massively reduced.

Taken together, and as anyone who has moved across borders will know, changes in the cost of living in the country of destination will feature in any decision to make the move in the first place. Perhaps not in a detailed spreadsheet kind of way, but it does clearly feature.

The volume dimension is one part of the the package – and it shouldn’t be over-stated. However, it certainly shouldn’t be under-stated either. Unless, of course, you want to end free movement.
Author : Open Europe blog team
Print