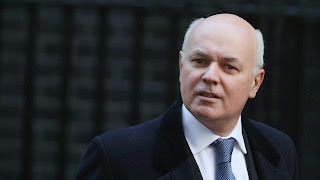 The Telegraph has an interesting transcript of an Iain Duncan Smith interview with LBC Radio, which outlines the Government’s current thinking on EU migration and which might signal the types of reforms that David Cameron is weighing up before delivering his promised speech on immigration in the aftermath of the Rochester and Strood by-election.

Here’s what the Work and Pensions Secretary said, following this week’s European Court of Justice ruling on access to benefits:

“This is about people who want to enter a country and have no prospects of work and are not intending to work, so that is stopping and shutting the door to them as we have done.”

Essentially, IDS says that the ECJ’s ruling runs with the grain of the domestic changes the UK has already made to restrict access to out-of-work benefits. But he is clear that he wants to go further:

This is very much along the lines of what our Research Director Stephen Booth and Professor Damian Chalmers proposed in their pamphlet on EU migration and national welfare systems – a re-write of EU legislation to enable national governments to restrict access to non-contributory benefits for up to three years.

And, thirdly, IDS suggests that:

“And the third area which you talked about…is that the issue around freedom of movement isn’t that you don’t want to stop freedom of movement, but what you want to be able to say is: ‘sometimes there are limits that communities can absorb people and the pressure on public services and housing and stuff like that’.”

“European rules need to take recognition of the pressure that puts on local communities, and that’s really part of the negotiation.”

This last point is perhaps the most interesting as it suggests that the option of some form of ’emergency brake’ on EU migration is still under consideration.

As we have said before, there are many ways in which such a mechanism could operate, and it might just be negotiable, although this would be a much taller ask than reforming the rules around access to welfare.