What are the implications of today’s ECJ ruling on EU migrants’ access to benefits? 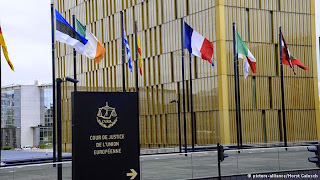 As we’ve said on many occasions, it is not only the UK that is having problems reconciling EU free movement with maintaining control over national welfare systems; Germany has recently tightened up its own domestic rules recently and the country also faced a legal challenge from a Romanian woman living in the country who claimed the right to receive German unemployment benefits – a case which was referred all the way up to the ECJ.

Essentially, the Dano case concerns the interpretation of existing rules around EU free movement and the extent to which EU migrants have a right to equal treatment with nationals of the host member state with regards to access to benefits,

The Court has finally issued its verdict today, ruling that:

“The [2004 free movement] directive thus seeks to prevent economically inactive Union citizens from using the host Member State’s welfare system to fund their means of subsistence. A Member State must therefore have the possibility of refusing to grant social benefits to economically inactive Union citizens who exercise their right to freedom of movement solely in order to obtain another Member State’s social assistance although they do not have sufficient resources to claim a right of residence.”

It is also interesting that the Court has confirmed that certain non-contributory benefits are outside the scope of EU rules which guarantee equal treatment and non-discrimination. The UK and other national governments can therefore use this precedent to defend their restrictions on EU migrants’ access to non-contributory benefits (i.e. the ‘right to reside’ test which could be subject to an ECJ legal challenge).

It also states clearly that ‘special non-contributory benefits’ are a national competence – much of the dispute between the UK and Commission over the ‘right to reside’ test relates to the categorisation of certain UK benefits. This could be useful to the government but it is also true that the UK’s case still rests on how the benefits they restrict are defined (i.e. do they fall under the label of ‘special non-contributory benefits’), and whether the Commission and the ECJ agree, which we still don’t know yet.

In short – this is likely to be a helpful precedent for the UK and potentially a sign that the Commission/ECJ are prepared to back down over the ‘right to reside’ issue. But more fundamental changes on in-work benefits, which are increasingly important issues in this debate and particularly for the UK, will require changes to EU law – here we set out how this could be done while keeping the principle of free movement itself intact.