The £1.7bn question (Part II) – What are other EU finance ministers saying? 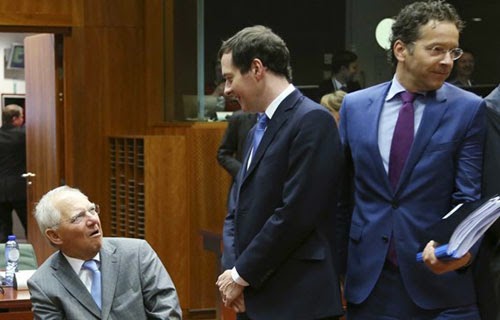 Here’s a round-up of comments from other EU finance ministers about the UK’s £1.7bn EU budget surcharge and the deal struck at today’s meeting. This being EU budget negotiations, everyone is claiming either ‘nothing to see here’ or victory. Apart from the Dutch, who are getting a pretty raw deal.

We’ve given our take on the deal in this blog post: when all is said and done, the UK will pay £850 million. The question is whether the rebate the UK gets from the EU budget always applied to the £1.7 billion, and whether, therefore, George Osborne is basically engaging in accounting manoeuvres.

Remember, due to the way the UK’s rebate from the EU budget is structured, everyone is basically paying for it, so it’s not in anyone else’s interest to ever talk it up.

“My understanding is that the UK will pay the whole amount but there will be no penalties attached or interest rate on that.”

“No-one has put into question the [European] Commission’s figures…as perfectly valid. Basically, what we agreed on is the possibility of a delay in payments.”

According to Austria’s Hans-Jörg Schelling,

“Whether the money is to be paid in instalments or as a lump sum is a discussion we can have. But the amount cannot be put in question.”

“Compared to a situation where the Commission was not going to table a new proposal, of course this is a victory for the UK…Given the amounts, I can understand that one wants to discuss both transparency and the calculations.”

As regards German Finance Minister Wolfgang Schäuble, he avoided taking a clear stance despite several attempts from journalists at his post-ECOFIN presser. All he said was,

“We have discussed instalments…but we haven’t discussed the British rebate…which doesn’t mean that the Brits do not raise these questions…I don’t have opinion on that.”

So all clear then…

The most depressing part of this episode is that an enormous amount of energy has been spent, and the UK has been pitted against natural allies, not least the Dutch. Secondly, absolutely nothing on the substance of the EU’s wasteful budget has changed.