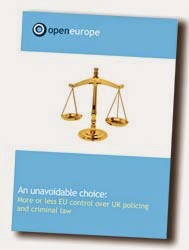 Open Europe’s Christopher Howarth wrote the following article for the Telegraph. For more information as to the UK’s crime and policing opt out please also see Open Europe’s An Unavoidable Choice

Why is the European Arrest Warrant so controversial?

MPs are being faced with two equally unpalatable choices

To those unaware of the tortuous nature of EU treaty negotiations, it may seem odd that MPs are being asked to vote to opt into the European Arrest Warrant – and not just because it may cause ructions within the Conservative Party ahead of the Rochester and Strood by election. Weren’t we in it already?

Actually, the EAW is only one of a package of 35 EU police and crime laws that the Government wants to opt into by December 1. And here’s why it matters so much, both to the Government, and to its opponents:

Where did it all start?
It all goes back to the Lisbon Treaty. Prior to that, all EU crime and policing laws were dealt with “inter-governmentally”. However, the architects of the Treaty were keen to place these measures under the remit of the European Court of Justice (ECJ) and the enforcement powers of the European Commission.

Realising that signing up to the ECJ’s jurisdiction would complicate its desire to avoid a referendum on the Treaty, Britain’s Labour government brokered a deal. The ECJ would get jurisdiction in 2014, but in return the UK would get a “block opt out” on around 130 crime and policing measures.

This opt-out could have provided the basis for Britain to negotiate a new deal, perhaps using a bilateral UK-EU treaty, thus solving some of the underlying concerns. But this opportunity was lost – possibly as a result of internal Coalition politics.

But why does the vote have to be now?
Last summer the Prime Minister finally exercised the opt-out – which takes effect on December 1. But, having done so, the UK has until then to decide whether to opt back in to some of these laws on the new terms.

Having decided not to renegotiate a new deal, the Government is presenting Parliament with a choice of two bad options: stay out of the 35 measures the Government argues are essential to fight crime, or go in on terms that hand over ultimate authority over these laws to the ECJ and the European Commission for the first time.

But why is the European Arrest Warrant so important?
Of these 35 laws, the EAW is the most controversial for several reasons. On the one hand, there are obvious concerns about handing over British citizens to another EU state without giving that person the right to ask if there is a case against them. On the other hand, the police argues it is vital to protect the public from crime.

If the UK opts in, it will forfeit to the ECJ the ultimate ability to say no to the extradition of its citizens – a step that even states within the US are able to take. Stay out, and we will fall back on previous arrangements that were slower, less reliable and therefore may allow some criminals to escape justice. And yes, the UK Government has made some welcome domestic reforms to how the EAW operates, but time will tell whether these will withstand future ECJ interpretation.

What does this all mean?
It means that, unfortunately, MPs have been presented with an unenviable choice. However they vote in the coming weeks, many Conservative MPs will certainly want to revisit this issue in any EU renegotiation.