EU budget row: How much interest will the UK pay if it refuses to cough up?

As most of you will know by now, the European Commission has asked the UK to pay an extra £1.7bn surcharge into this year’s EU budget – before December 1. David Cameron has said he won’t pay anything “near that amount”, which in turn has triggered an almighty stand-off with the Commission itself insisting that if the UK fails to pay, it’ll be charged interest from day one.

There has been a lot of confusion as to how much interest the UK will be legally liable to pay if it follows through on David Cameron’s threat to refuse to pay. The answer as always lies in an EU Regulation as we pointed out here.

So how much is it? The short answer is a lot. Let’s say Cameron holds out for one month. He’ll then owe the EU £3.5 million in addition to the original £1.7bn surcharge. If he holds out for six months, UK taxpayers are looking at an additional £39.1 million while one year will increase the bill to £89 million – the annual interest will then stand at 5.25% . If the debt is still outstanding after 10 years, the UK would owe an eye watering £5.5bn of interest on a £1.7bn debt – over 300% interest.

In other words, under EU rules, the penal rate is ever increasing.

This is how it is worked out. Firstly the regulation states an annual interest rate of 2% above base rates per year – making a current 2.5%. It’s worth keeping in mind that this is much more than the UK pays itself to borrow (in maturities up to 12 years or so, see UK yield curve here). However there is a sting – a rising penal rate of 0.25% for each outstanding month, and the total interest is all paid at the higher rate. This quickly adds up as you can see below: 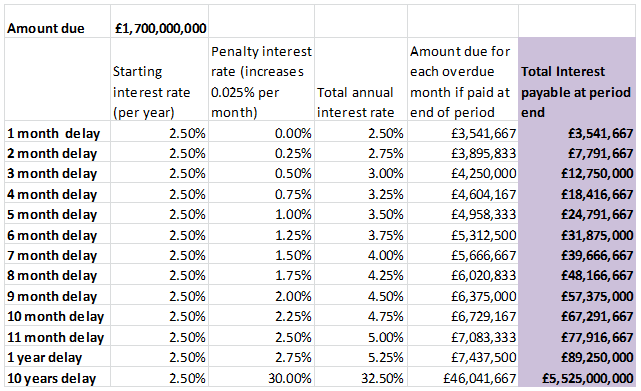 So if this drags on, it has the potential to really become messy. However, as with everything in the EU there is usually a political solution. The Netherlands and Italy are also upset at receiving demands while the calculations (particularly around the interaction with the UK rebate) and the EU amending budget that goes with it are still up for ‘clarification’ and/or amendment. As reports today also indicated, it seems likely the UK will be able to do a face saving deal to pay something more than zero and less than £1.7bn – but if not the implications are huge.