Everyone take a deep breath: suggestions Merkel ready to accept Brexit following free movement row are wide of the mark 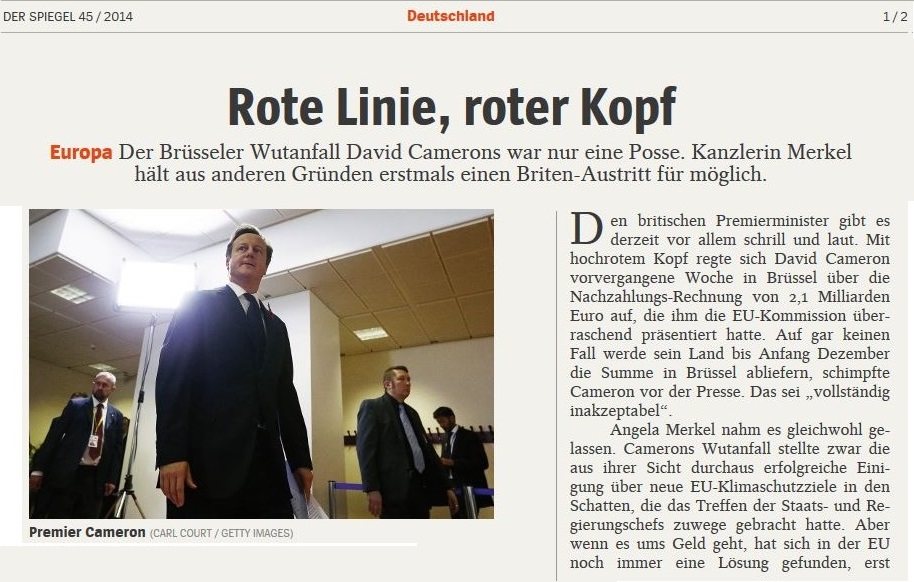 Der Spiegel reports that German Chancellor Angela Merkel warned David Cameron at last month’s EU summit that she would no longer try to keep the UK in the EU if Cameron sought to impose quotas or a cap on workers from other EU countries, as opposed to changing the rules around EU migrants’ access to benefits. The magazine also reported that the German Chancellery and Foreign Ministry fear that, for the first time, Cameron is pushing the UK towards a “point of no return” in terms of its EU membership and that a UK exit is “possible”. But there’s no reason to be get overly excited though.

However, within that there’s a lot of scope for change and plenty of EU reforms that could fly in Berlin. Remember, the Bundestag will this week vote on a number of proposals aimed at tightening EU migrants’ access to benefits, including re-entry bans for those migrants that abuse of the German welfare system.

It’s interesting that since the stories in the UK media about a points-based system or quotas for EU migrants, FAZ and the Sunday Times note that the UK government is now looking to make its EU free movement proposals “Germany-compatible”. Also, UK Chancellor George Osborne told the BBC this morning,

“It was never envisaged that you would have such large numbers of people coming, people coming who don’t have job offers, people who move on to our benefits system…We are going to do this in a calm and rational way, but the British people want this addressed.”

The “job offer” part is interesting – the right to move to another EU country without a specific job offer hasn’t always been there. However, note there’s nothing about a cap – what the Der Spiegel report was about.
Similarly, at Downing Street’s briefing to journalists today, Cameron’s spokeswoman said:

“When the founding fathers established the European Union and introduced the principle of free movement, it was about labour and how you integrate the countries of the single market. The mass migration that we have seen with new countries joining, the impact on countries like the UK, the free movement to claim benefit – these are areas that have evolved and need to be addressed.”

There’s the point about wider “impact” but, again, the main focal point is benefits.

Which may suggest that No 10 remains primarily committed to looking at “fairness” – not actually ending free movement per se.

So only tweaks then? Not at all. Open Europe has today published a new pamphlet by Professor Damian Chalmers and Open Europe Research Director Stephen Booth which argues that the basic right to go and work anywhere in the EU should stand – on the whole, free movement remains a clear benefit to the UK. However, national governments should be able to limit EU migrants’ access to out-of-work and in-work benefits, social housing and publicly funded apprenticeships until after three years.

Incidentally, Der Spiegel did not claim that Merkel was now ‘ready to accept’ the UK exiting the EU, as some UK media outlets have reported. Instead, she now considers Brexit “möglich”, which translates as “possible”, which is more along the lines that it is something she fears.

In other words, whilst certainly a strong indicator of the mood music in Germany and the UK, on specific substance, this is much less of a story than the headlines suggest.