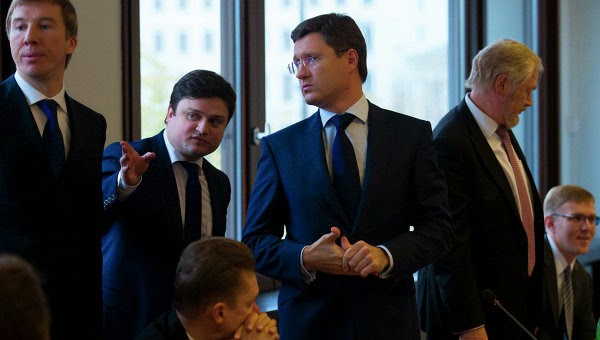 Update 11.50 30/10/14:
Reuters is reporting that an EU spokesperson has said a deal is “very close” and talks will continue today, as we note below. As we also say below, a deal is still doable and likely, the question remains whether any form of EU payment guarantee will be needed and if this can get sufficient support within the broader EU member states.

Despite another round of talks between Ukraine, Russia and the EU which ran late into the night yesterday the negotiations seem to have reached somewhat of a stalemate.

Earlier in the year the halting of gas supply between Russia and Ukraine (for Ukraine’s own use at least) was not seen as too big of an issue and it was hoped Ukraine would be able to leverage the combination of economic pain from sanctions and the Russian government’s reliance on commodities exports for funding to secure a relatively favourable deal. However, on the cusp of the harsh Ukrainian winter the power balance has steadily shifted and Russia has continued to hold firm and even broadened its demands.

What has been agreed so far?
Quite significant progress has actually been made compared to the starting point:

Russia has clearly shifted from its original price demand (at least with regards to back dated payments), but Ukraine has also compromised by agreeing to prepay and pay off existing debts.

What are the key sticking points?
There is really only one, but it’s a biggie. While Ukraine has proven that it can afford to pay off its existing debts there is much less certainty about its ability to prepay going forward.

We have noted before the significant downward spiral in the Ukrainian economy. While the fighting has calmed down to an extent, things are still far from normal, not least because the conflict has become frozen in the East with part of the country still de facto cut off.

Ukraine is now totally reliant on external funding from the EU and IMF. As we have seen in the Eurozone crisis the release of such funding is often more complicated than expected and creates a staggered cash flow linked to economic reforms. Such reforms should pick up following the election but remain tricky to implement in a country caught in the proverbial no man’s land in the sanctions war between Russia and the EU.

For these reasons Russia has continued to demand some form of explicit guarantee from the EU that Ukraine will be able to pay for the supplies over the winter – they are expected to cost around $1.6bn, though this could increase if the winter is particularly harsh.

Is a deal likely?
It’s looking difficult as this meeting was earmarked as the most likely one for a deal. Russia seems to be using this arena to flex its muscles given that it believes it has the upper hand. That said, the economic costs of sanctions and a falling oil price are creating problems for the Russian economy, though it’s not always clear whether economic logic is sufficient to alter Russian President Vladimir Putin’s position.

Getting explicit EU support for around $2bn to guarantee prepayment would be difficult. But, so far, the EU has been fairly supportive of Ukraine and may be willing to offer a more tacit agreement to provide further funding rather than outright underwriting of the payments. Furthermore, without a deal there will be a huge temptation for Ukraine to siphon off gas which it is transiting from Russia to Europe. This could cause Russia to halt all gas flow through Russia, something Europe is keen to avoid to say the least.

Talks are set to resume later today according to RIA Novosti. With all this in mind, and the fact that a deal remains in all sides’ interests, we would think one could still be struck.

What are the lessons here?
Ultimately, this dispute is teasing out a key question for the EU in the wake of this crisis. It is becoming increasingly clear that Ukraine is economically devastated in the wake of the war and the sanctions. The offer of opening up markets in the EU is unlikely to be sufficient and the EU and IMF will have to face up to the fact that in the short and medium term they will probably have to offer significant amounts of cash to Ukraine to help stabilise its economy, currency and energy supply.

Putin is aware of how politically sensitive this is for the EU – it has just gone through a series of its own bailouts in the Eurozone crisis and now countries are being asked to stump up cash for a country which is not even a member (and is unlikely to be one for the foreseeable future, if ever). As with the sanctions, this narrative is likely to expose dividing lines within the EU and set the tone for the negotiations over the future of Ukraine.