France and Italy get preliminary approval of their budgets, but it’s not the end of the story 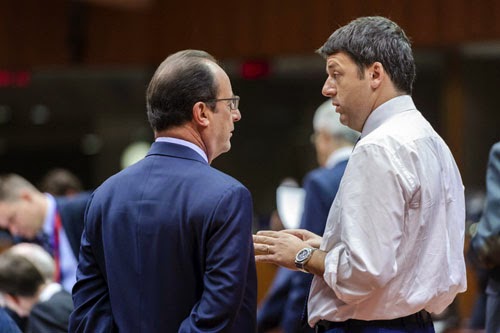 The European Commission has given France and Italy a preliminary nod through on their draft budgets for 2015. In a statement released yesterday evening, Commission Vice-President Jyrki Katainen said:

“After taking into account all of the further information and improvements communicated to us in recent days, I cannot immediately identify cases of ‘particularly serious non-compliance’ which would oblige us to consider a negative opinion at this stage in the process.”

An outright rejection of the French and Italian budget plans was always unlikely, as it was in no-one’s interest to trigger an almighty row involving the second and third largest Eurozone economies. However, doing nothing was also never really an option for the Commission. Had it let France and Italy get away with draft budgets that were not only clearly deviating from their deficit reduction commitments but also not even acting to try and meet them, the credibility of EU fiscal rules – already wafer-thin – would have been shattered.

Over the past few days, both France and Italy pledged to make additional cuts to those initially planned for next year. Therefore, at least in terms of political narrative, the Commission got the upper hand in this first round. It stood up for budget consolidation, and it made its demand for extra efforts heard in Paris and Rome. On the other hand, for all their anti-austerity bluster, French President François Hollande and Italian Prime Minister Matteo Renzi are likely to come across as eventually bending to the will of Brussels.

That said, this is by no means the end of the story. The measures proposed by France and Italy to achieve the extra deficit reductions look far from structural. Also, as the FT notes, the changes are still short of what the Commission demanded and remain vaguely defined:

The Commission will issue its final verdict on the draft 2015 budgets of all Eurozone countries by the end of November. We would expect the Commission to come up with a set of stringent recommendations for France and Italy, although an entirely negative opinion looks unlikely. In the end, we may well see a replay of the current discussion. In the meantime, as the contrasting headlines from the New York Times today show, some may struggle to discern who exactly capitulated…