On this blog, we have been tracking Podemos, Spain’s six-month-old anti-establishment party, since its very first success in the European Parliament elections in May – when the party came from nowhere to secure five MEPs (see here and here).

The rise of Podemos has continued since. According to a new poll released by Tele Cinco yesterday, the party led by Pablo Iglesias would finish second in a general election with 24.1% of votes – behind Prime Minister Mariano Rajoy’s Partido Popular (on 28.3%) but ahead of the Socialist Party (on 23.7%). 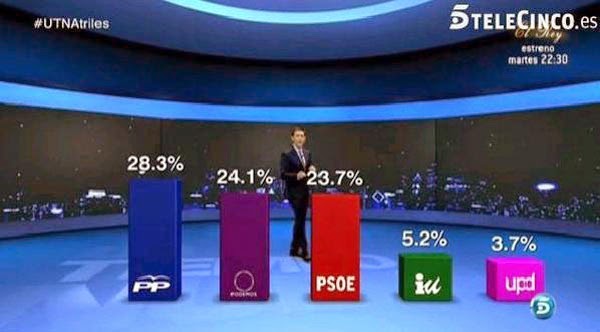 Podemos was only officially registered as a political party in March and is already polling as Spain’s second most popular party. This is absolutely extraordinary in itself, but this second graph is even more interesting: 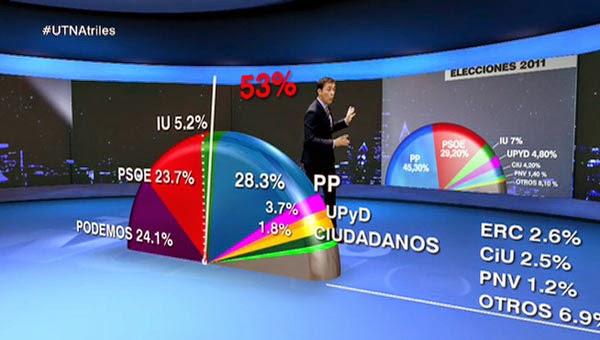 Essentially, this poll suggests we may be looking at the following two post-election scenarios:

The new Socialist leader Pedro Sánchez has so far ruled out joining forces with either Partido Popular or Podemos, but the next Spanish general election is still a year away – so things may well change. Opinion polls can certainly be wrong, but as we noted in our previous blog posts, the steady rise of Podemos should not necessarily come as a surprise. There was a gap in the market, so to say. Spain, the country that had given birth to the indignados movement, had no real anti-establishment party.

Now that Podemos has entered stage and is consistently polling well, traditional parties may be forced to engage with its arguments. At the same time, we would expect Podemos to come under greater scrutiny and pressure as Spaniards begin to contemplate its role as an opposition party or even as a member of a governing coalition.

One thing Spain’s mainstream political forces should keep in mind is that, as Italy’s Five Star Movement showed last year, simply ignoring a protest party and hoping it will go away can often backfire.