EU budget surcharge: how much support does the UK have around Europe?

David Cameron has taken a very tough position on the EU budget surcharge, claiming that he “won’t pay” the £1.7bn the Commission has demanded from the UK by December 1 after concluding the UK had been underpaying into the budget relative to the size of its economy. Other countries have also been hit – so how much support does Cameron have around Europe?

These changes which again are due to recalibration in the way the size of economies are calculated (more on this later) are being tagged on to the annual “adjustment” to the EU budget, which is basically normal procedure.

However, this also means that EU leaders will have to agree to an “amending budget” via a decision taken by Qualified Majority Voting. This also means that the UK might have some chance of “blocking” the change if it can get other allies on board.

Below is the voting balance, if all “net losers” are clubbed together under QMV. 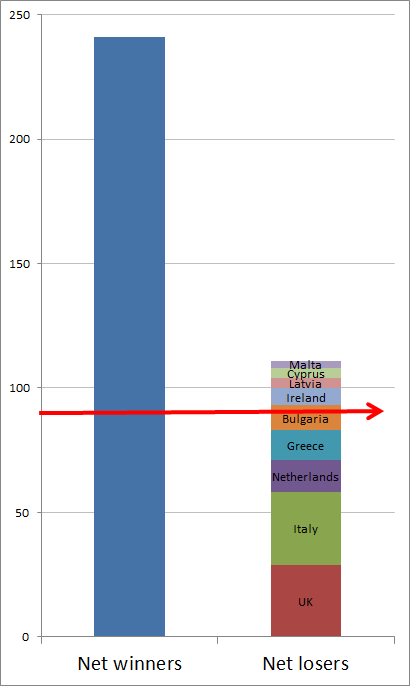 However, not all the other member states affected have been as firm as Cameron. The Dutch have appeared to soften their stance with Dutch Finance Minister Jeroen Dijsselbloem stating on Dutch TV yesterday that the Netherlands would pay its €642m surcharge “if the facts and figures are correct”. Irish Taoiseach Enda Kenny said his Government will pay the additional bill, adding that “we have always abided by the rules”, while Maltese Prime Minister Joseph Muscat claimed that:

“Malta is not surprised that the EU has asked for this top-up… but we are still seeking clarifications on how the [Commission] calculated this figure”.

“An in-depth examination is needed… we will see whether it will be really necessary to apply the new method to calculate [national] contributions. In any case, this doesn’t imply an immediate payment.”

So hardly an endorsement of the UK’s tough position, but there may be enough support for a delay or some alternative arrangement such as paying the surcharges in installments. Meanwhile, Cameron did at least get some support from an unexpected source… France (which has received a €1bn rebate). The Telegraph cites former French Europe Minister Pierre Lellouche as saying that:

Sadly for Cameron, Lellouche won’t have a vote.