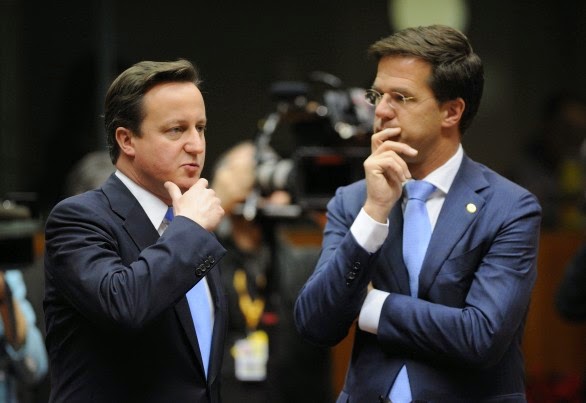 Update 24/10/14 17.05:
Outgoing Commission President Jose Manuel Barroso has just given his press conference which frankly did not clear much up. Barroso insisted, as the Dutch position below does, that this payment demand is part of an annual adjustment which is based off of the revised figures for annual GNI (which are produced by national statistics agencies and then verified by eurostat).

Essentially, he is suggesting that the final figures for the UK in 2013 proved to be so far ahead  of expectations that they altered the UK’s share of the budget significantly.

This is not a completely implausible scenario but it leaves some glaring gaps. Firstly, its hard to imagine the economy outperformed so much and other EU economies underperfomed so significantly that the UK has to stump up another €2.1bn. Secondly, this doesn’t fit with the leaked doc from the FT. As discussed below, the figures clearly seem to relate to a longer term assessment based off the ESA changes to the way GNI is calculated.

All that said, its becoming increasingly clear that the positions of the Commission, UK and others are not quite compatible so something will have to give in a negotiation.

Currently, there is still no clear explanation for where the demand for increased contributions to the EU budget came from or exactly how it was calculated – see our comprehensive analysis here. While the Dutch and the Brits are both concerned about being asked to contribute more, they are actually putting slightly different versions of events forward. These two split the prevailing theories about how this has come about.

The first version of events, pushed by the Dutch, suggests that this is not as surprising has been made out since it is actually down to the regular assessment of the four cycle of VAT receipts and tax returns related to GDP of countries. When asked by Dutch BNR radio ‘Does this revision have anything to do with the new accounting method?’, Dutch Finance Minister Jeroen Dijsselbloem responded,

“No, this seems to come from a [annual] source revision which is something different from the statistical method that is used to calculate [the GDP].”

The point that surprised the Dutch was that the demand came out at almost double what they had forecast and there is no clear explanation of why this is.

The other version of events ties into the document leaked by the FT. Judging by this document it is hard not to see this cost as a result of a calculation based off the introduction of the new European System of Accounts 2010. The UK is suggesting it was unaware of such a significant overhaul to the EU budget calculations and has not been included in the discussion around the changes. The document clearly looks to alter the budget contributions over the period between the introduction of the previous system of accounts and the end of 2013. The total figures also line up with the reports and are yet to be rejected or even disputed by anyone. The fact the figures are so large also fits more with this version of events than the regular adjustment – in this sense something will have to give (size of demand primarily) for the first version of events to be true.

What do they agree on?

While this may seem trivial it is vitally important that the Commission makes clear and gets to the bottom of what is going on here. Ultimately, Cameron’s options will be very different depending on whether the demand is driven by a unique one off event (such as long terms GDP changes) or part of a regular assessment of the EU budget. In any case, whatever the source serious questions need to be asked about how a bill of €2.1bn can materialise with little or no political discussion.