Michael Wohlgemuth: Why the EU cannot bank on Germany’s economy 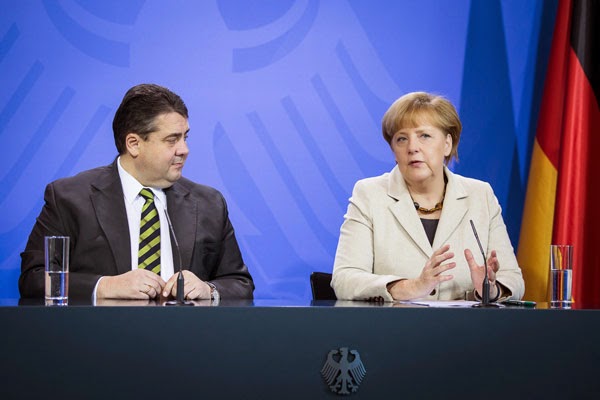 Open Europe Berlin Director Michael Wohlgemuth has written an interesting piece for World Review, looking at the current status of the German economy. Here it is:

The German economy is showing clear signs of weakening. GDP declined by 0.2 per cent in the second quarter of 2014 and German business sentiment fell for a fifth straight month in September to its lowest level in 17 months. Manufacturing orders dropped during August to the lowest level since May 2013.

Germany’s problems will remain and get worse.

Much of the resilience of the German economy during the last years can be attributed to harsh labour market and social security reforms. These were introduced by the Social Democrat Chancellor Gerhard Schroder (1998-2005) in 2003 with his ‘Agenda 2010’.

The new centre-right / centre-left coalition led by Chancellor Angela Merkel has rolled back many of these reforms by reintroducing early retirement, granting extra pensions for mothers and installing an unprecedented legal minimum wage – of 8.50 euros per hour – in all sectors and all regions of Germany.

The German government has been forced to admit that the minimum wage will increase labour costs by 10 billion euros. It is still unclear how many jobs will be lost after its introduction in 2015.

The new pension benefits will cost around 200 billion euros until 2030. Early retirement could take up to 250,000 elderly off the job market over the coming years when skilled and experienced labour is becoming increasingly scarce and valuable.

Demographic decline will be Germany’s greatest challenge in the long run: coming decades could see Germany’s workforce shrink by about 200,000 every year. The old age dependency ratio – between those older than 65 and those of working age – could increase from 31 per cent in 2013 to 57 per cent in 2045.

Immigration to boost the workforce would be essential. Experts calculate that net-migration of around 400,000 people a year – preferably young and educated – would be needed to avoid demographic decline.

So where should Germany’s future economic growth, desperately needed to pay for pensions and somehow to rescue the eurozone, come from?

The answer is from productivity and innovation, in short: smart investment. Labour participation rates, labour productivity and entrepreneurial ingenuity would have to increase dramatically.

However, Germany’s productivity growth is lagging behind almost all other economies in the world.

The established German Mittelstand – its economic backbone of small and medium-sized enterprises – and some big exporting firms, are still good at innovation. However, Germany holds a dismal 111th place in the World Bank’s ranking for ‘ease of starting a business’ and its service sector is under-developed and over-regulated, while Germany’s education system fails to produce enough matching skills.

Germany’s capital stock is depreciating faster than new investments are replacing it. A declining capital stock combined with a declining workforce, leaves no hope for a growing economy.

That does not mean Germany’s government must add more public debt to the mix.

Many observers are demanding that the government abandons its ‘austerity obsession’ and take advantage of the historically low interest rates for more debt-financed ‘stimulus’.

But the Merkel government is still in the position to do the right thing and increase investment without abandoning the new constitutional balanced budget rule. German politics should also provide better regulatory and tax environments for private domestic investment and lower barriers to entry for its service sector.

Domestic industrial investment is also increasingly discouraged by the ‘lonely revolution’ to wean Germany off both fossil and nuclear energy.

This policy may cost consumers, taxpayers and business up to one trillion euros over the next two decades, according to Peter Altmaier, the former minister for the environment, who is now chief of the Chancellery and minister for special affairs.

German energy costs are now more than double those in the US, while Germany’s greenhouse emissions have increased.

German entrepreneurs and foreign investors have always had these negative factors on their radar.

Germany’s problem is not austerity, but demography and complacency. The message is you cannot bank on Germany.