The Farage Paradox part II: Support for EU membership at highest level since 1991

Back in May, we pointed out the so-called ‘Farage Paradox’ – even as the party came first in the European elections in the UK and Farage himself was widely seen as having bested Nick Clegg in their TV debates, support for leaving the EU had fallen to its lowest level for a long time according to Ipsos-MORI with 37% in favour of Brexit and 54% in support of staying in.

A few months later and UKIP is still riding high in the polls with a victory in the Clacton by-election under its belt and with the Tories on the run in Rochester and Strood – amid all kinds of noise around EU migration. However, on the wider EU question, support for membership has climbed even higher – today’s Ipsos-MORI poll has support for membership at 56% – its highest since 1991!! – with support for leaving on 36%. 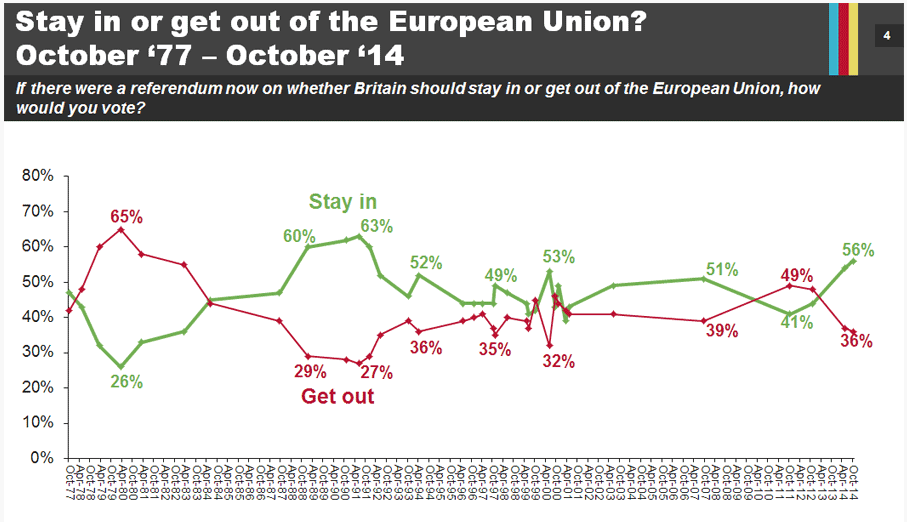 It’s not entirely easy to nail down the drivers behind the trend – even the UK’s public defeat over the appointment of Jean-Claude Juncker as European Commission President hasn’t reversed it but one possibility could be that as the prospect of exit becomes more real, especially in the wake of the Scottish referendum, people are more likely to go with the ‘better the devil you know’ option. Another explanation is that Farage is good at stirring up support in concentrated parts of the country, but his divisive rhetoric turns others off. A feel-good factor over the economy (through as we’ve argued before, this can cut both ways) combined with increased uncertainty around the world – making the status quo look safer and club membership more attractive – could be other reasons.

Either way, it shows that even as UKIP find a way of tapping into disenchantment with the EU and mainstream UK politics, they are failing to convince  people that they have the right remedies and this risks derailing the broader ‘out campaign, as the pro-Bexit Tory MP Michael Fabricant has warned:

“The out team will be very different, with no leader who commands popular support. Before you can even make the case for Britain becoming a mid-Atlantic economic hub, freed from the shackles of Brussels diktats, the Eurosceptics will be all over the place. No clear leader, and angry looking grey men who have been arguing the toss on Europe for years, will fail to impress. Yes, Nigel Farage is clearly the most charismatic Eurosceptic in years, but does anyone really imagine Farage being the Alex Salmond of the out campaign? Would he be persuasive enough to seduce a nation?”

However, it is worth bearing in mind that other polls have slightly different outcomes. Today’s YouGov poll for the Times’ red box showed lower levels of support for EU membership – support for membership is roughly the same under their ‘major changes’ scenario as under Ipsos-Mori’s status quo scenario (YouGov’s status quo option assumes renegotiation was attempted but failed to secure even modest changes, so can’t be directly compared with the Ipsos-MORI one). 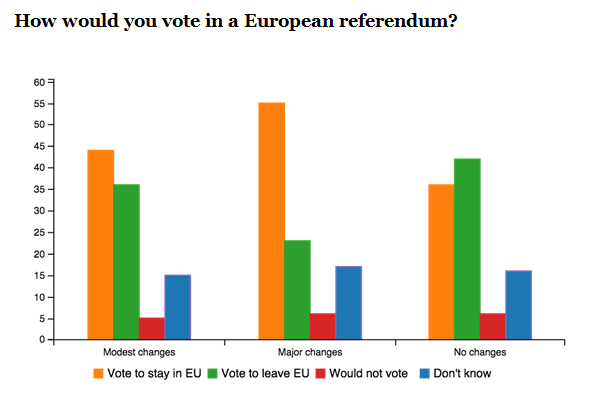 This shows that even if some polls suggest a majority of Brits would vote to stay in no matter what, EU reform and renegotiation remains by far the best option for any UK government.
As has been noted before, that’s why some Better Off Outers are now starting to fear that long sought after In/Out referendum – in itself an ironic development.
Author : Open Europe blog team
Print