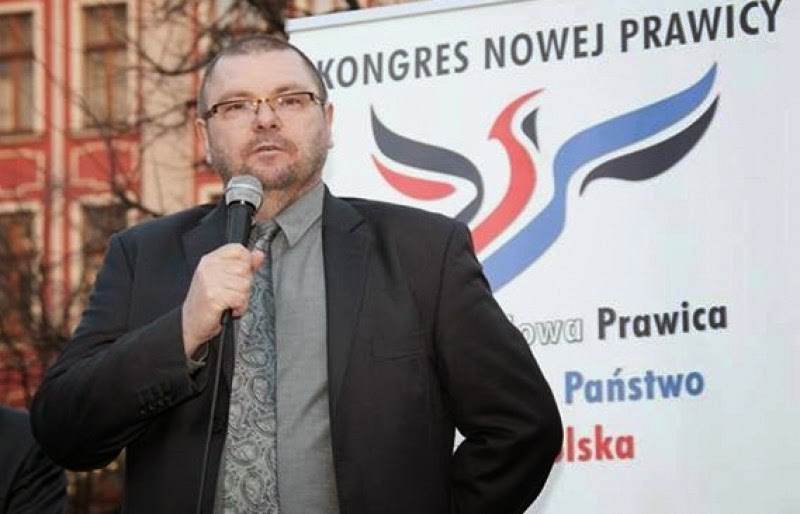 We reported only a few days ago that UKIP’s EFDD group in the European Parliament collapsed after a Latvian MEP resigned, meaning the group no longer met the criteria of having MEPs from at least seven different EU member states. The news drew a lot of media attention (not to mention schadenfreude) mainly due to the financial implications for UKIP – which, according to our estimates, stood to lose nearly €2 million a year in EU funding.

Today, it was announced that Robert Iwaszkiewicz, an MEP with Janusz Korwin-Mikke’s KNP (pictured) has joined the group. Korwin-Mikke himself was deemed too toxic to join the UKIP group after the European elections given his controversial views on rape (women always “pretend to resist”) and the Holocaust (no evidence Hitler knew about it), and that was before he provoked a full-blown race row. Iwaszkiewicz himself is hardly baggage free; during an interview about with Gazeta Wrocławska a couple of months ago, when asked about domestic violence, he said that:

“I’m convinced that many a wife would benefit from such a response in order to re-connect with reality.”

When asked about his Korwin-Mikke’s views as described above, he said that “these are taken out of context… when considered broadly, they make sense”. In any event, this does not appear to be a principled defection – but rather a classic Brussels-style dirty deal. Polish daily Rzeczpospolita reports that Korwin-Mikke and Farage struck an agreement which would see Iwaszkiewicz’s transfer mirrored by an MEP from the EFDD move to the ‘far-right’ bloc led by France’s Marine Le Pen, which also includes Geert Wilders’s PVV, the Austrian Freedom Party and Lega Nord, and fell one nationality short of forming an official group during the summer. The paper describes this a “binding transaction” and quotes Iwaszkiewicz as saying that:

“Negotiations are on-going. It was necessary to save them and I had to join urgently”.

It remains unclear therefore whether an MEP from the EFDD will definitely join the Le Pen group – but that seems to be the implication. Because of the way the nationalities are represented over the two groups, it would either have to be one of UKIP’s 24 MEPs or one of the two Sweden Democrats.

If the former, UKIP and Nigel Farage will face some uncomfortable questions given the extent to which they have tried to distance themselves from the Front National. Regardless, this incident just underscores the absurdity of these taxpayer subsides for European Parliament groups.