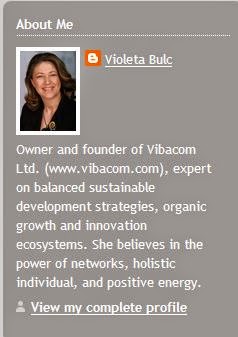 The first (and only) causality of the European Parliament hearings for Jean-Claude Juncker’s new Commission so far, is Slovenia’s Alenka Bratusek, who withdrew her candidacy for the post of Vice-President for Energy Union after a being effectively vetoed by MEPs.

She’s been replaced by Violeta Bulc, Slovenia’s Development Minister, who will face the music next Monday, when MEPs grill her on her suitability for the Transport portfolio (the Energy Union job will go to Slovakia’s Maros Sefcovic).

But who is Violeta Bulc? Quite a colourful personality, if the internet is anything to go by. Europe is so often accused of being run by boring bureaucrats, even being accused of being as charismatic as “damp rags.” Bulc is anything but. So we’ve picked out Bulc’s best bits, mostly from her CV online for you to savour below.

1. Interesting ideas about energy generation:  “Natural environmental heat can transformed directly into electrical energy,” says Bulc. A shame that she most likely won’t have the Energy Union brief really as it could have made for an interesting discussion during her EP hearing.

2. She believes in ‘Syntrophy‘ – which is apparently something to do with ‘the creative power of nature.’ And here’s what she had to say about discovering it. (Note the CAPS.)

At various levels and in various dimensions, and every once in a while, something triggers excitement in each and every one of our cells. Love. Surprise. Achievement of a goal. A realisation along the way. A thought. Hope. Birth.

I felt this type of excitement when I was introduced to SYNTROPY. I can hardly express emotions that were flooding me while I was traveling through complex formulas that were mostly incomprehensible to me, yet so familiar that I felt as if they were a part of my life all along.

3.  Positive values: Her business, Vibacom, is run on the values of “the power of positive energy and pure thoughts.” This “creates the conditions for prosperity and thrivability.” Well, the EU could definitely do with an injection of positive energy…

4. Serious sporting prowess: Not only does she have a black belt in Tae Kwan Do, but she was also a professional basketball player in Yugoslavia, and won athletic championships in javelin. Eat your heart out Vladimir Putin.

5. She blogs: Violeta’s blog is well worth a peruse. Here’s a post from last month called, “The vibrations of the White Lions in the new Era.”

6. She is a qualified Shaman and firewalker: She has a certificate from the Shamanic Academy in Scotland. No explanation offered – and is one needed? She has also received a certificate for “firewalk” and “breathwork” instructor at the recognised school of transpersonal education, Sundoor. Should come in handy during her grilling by MEPs…

7. She’s got charisma: In 2010, she won the “Sunny Personality of the Year” prize. We’re sure that a sunny disposition will help Bulc in Brussels which is hardly regarded as being among the most uplifting cities in Europe.

While we concede she may be a little out there, she certainly has the potential to shake up the dreary and self-regarding Brussels bubble.