Catalan government calls off independence referendum, but it’s not the end of the story 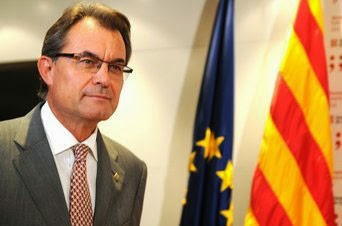 Catalan President Artur Mas has just been speaking to the press. His remarks were broadly in line with the blog analysis we published earlier (see below).

Two key points from the presser:

Meanwhile, Spanish Prime Minister Mariano Rajoy has hailed the cancellation of the Catalan referendum as “excellent news” and reiterated that he’s open to dialogue with the Catalan government.

The Catalan government has called off the non-binding independence referendum planned for 9 November. It was really just a matter of time. Catalan President Artur Mas had repeatedly stressed that he wanted the consulta to be legal, so that the outcome of the independence vote could be recognised as valid in Spain and beyond. However, the Catalan law used by Mas to call the independence referendum has been temporarily suspended by the Spanish Constitutional Court after the Spanish government lodged a legal challenge against it. Hence, going ahead with the referendum would have meant breaching the law – something the Catalan leader wants to avoid.

Clearly, though, this is not the end of the story. Mas will reportedly set out an alternative ‘participative process’ (proceso participativo) in a press conference this morning – but his new proposal is unlikely to be welcomed by the other pro-independence parties.

As we noted in previous blog posts, the ‘Catalan question’ seems to have got to a point where the option of going back to business as usual is not on the table anymore. The decision to call off the 9 November referendum may have opened a window of opportunity for the Spanish and the Catalan governments to engage in real talks.

Spanish Prime Minister Mariano Rajoy may be tempted to shut the door and just ignore Catalan demands, especially after Mas has backed down. However, the Catalan leader still has an ace up his sleeve: he can put further pressure on Madrid by threatening to step down and call early regional elections. A snap vote in Catalonia would very likely see a victory for the hardcore pro-independence Catalan Republican Left (ERC).

The party leader, Oriol Junqueras, said of the decision to cancel the independence referendum yesterday:

“We will have to build up a parliamentary majority to issue a declaration of independence and begin the constituent process of the Catalan Republic”.

With a Spanish general election due in November 2015, Rajoy would probably want to avoid having to deal with an ERC-led Catalan government and would therefore be more willing to listen. On the other hand, Mas would be taking a huge gamble himself by threatening to call early elections. The Catalan leader fought the 2012 electoral campaign on the pledge of an independence referendum that he has failed to deliver. Hence, his moderate nationalist Convergence and Union (CiU) party would face the risk of harsh punishment by disappointed pro-independence voters.

One thing is certain: the time of political posturing on either side is coming to an end. The sooner the Spanish and the Catalan government agree to sit at the negotiating table, the better.