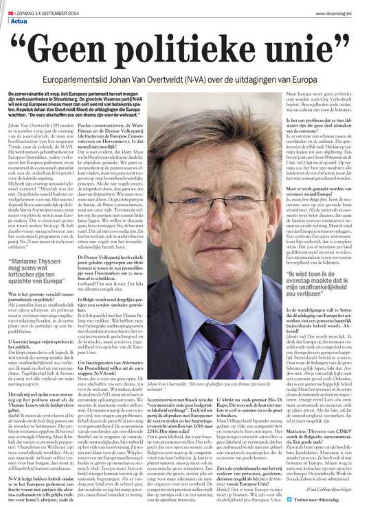 Good news for EU reform keeps coming from Belgium. After the publication of the new coalition agreement, which we’ve analysed here, it has today been announced that Johan Van Overtveldt will be the country’s new Finance Minister. A former editor-in-chief of Belgian business magazine Trends, he was elected to the European Parliament in May with the New Flemish Alliance (N-VA) – Belgium’s biggest political party and a member of the UK Conservatives’ ECR group.

Last month, he said in an interview that he wanted “no political union” (see the headline in the picture), and added:

“We need a more social Europe, but first the monetary union should be anchored on a healthy basis. When national economies perform better economically, countries will start taking initiatives which go in a social direction anyway…A uniform European minimum wage, for example, is complete non-sense. It would at least need to differ for each country. A minimum wage is a sovereign competence of member states.”

Furthermore, the new Belgian Finance Minister is a strong supporter of a ‘capital markets union’ – a key item on the agenda of the new EU Financial Services Commissioner, the UK’s Lord Hill.

An expert in monetary economics (and a personal acquaintance of the late Nobel Prize winning economist Milton Friedman), Van Overtveldt also has an interesting take on the future of the Eurozone. In 2011, for instance, Open Europe hosted the launch of his book, ‘The end of the Euro’. On that occasion, Van Overtveldt said he had “always been a doubter” of the sustainability of the single currency, and added:

“The only solution for Greece is to leave the euro…in order to save itself and its democracy.”

That said, Van Overtveldt has made clear that, despite his scepticism on whether the single currency may ultimately survive, he supports the efforts to keep the eurozone together. The new Belgian Finance Minister is in favour of “more economic powers for Europe”, but opposes Eurobonds or fiscal transfers. This sounds very close to Germany’s stance.

“The single resolution mechanism is too complex and takes too much time in order to be able to take action…The banking union as currently conceived leads to banks in weaker countries to do as much as they can to borrow from banks in stronger countries…Moral hazard is more than ever haunting the eurozone, like the Loch Ness monster.”

Importantly, Van Overtveldt has also warned against a “big leap” towards fiscal union in the Eurozone, saying it would effectively create “two European Unions” – and, according to him, effectively lead to the end of the EU. Hence, we can expect the new Belgian Finance Minister to pay good attention to the concerns of the UK and other non-Eurozone countries when it comes to safeguarding the integrity of the single market.