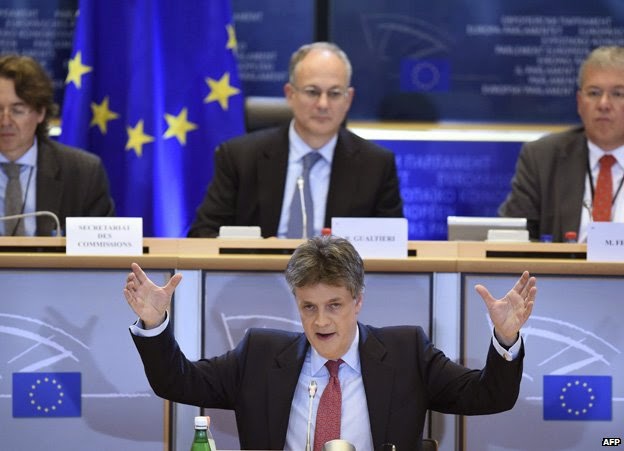 A couple of developments since we posted the original blog below.

Importantly, the European Parliament’s Economics Committee failed to reach an agreement over Pierre Moscovici and has delayed a decision on whether to approve him or not until 9.30pm CET tonight. Given his clear knowledge and experience in the area as a former French Finance Minister, the objection is clearly being driven by a fundamental split between the EPP (led by the CDU) and the S&D (led by the French socialists) over whether he is the right man for the job given his political allegiances and the fact France has repeatedly missed the deficit targets agreed with the European Commission over the past few years.

As regards Lord Hill, @Brunobrussels points out that a letter will be sent by European Parliament President Martin Schulz to Commission President Jean-Claude Juncker outlining some key questions for the UK’s nominee. It is unclear exactly what these questions will include, but the focus will be on his knowledge of issues such as the banking union, Eurobonds and financial regulation in general. There may also be questions around exactly what will be under his purview and his relationship with the Vice-Presidents. It also seems that concerns over Hungarian Commissioner Tibor Navracsics are growing, as we warned here. Overall, the process is at risk of descending into in-fighting and horse trading between the EPP and S&D (if it hasn’t already) – and Lord Hill has certainly got caught up in that.

UK Commissioner designate Lord Hill yesterday faced the European Parliament’s Economic and Monetary affairs committee which has to judge if he is suitable for the proposed role of Commissioner for Financial Services, Financial Stability and Capital Markets Union.

While Hill went out of his way to charm MEPs, in what the FT terms an “unprecedented move” the committee has recalled Hill for a second hearing early next week (likely Monday), reportedly due to concerns over his lack of detailed knowledge of the brief.
Having watched the hearing it was clear that Hill struggled on the minute details of some of the more technical questions from MEPs, some of whom have been dealing with this area for years. However, even some members of other UK parties have come to Hill’s defence. Labour MEP Richard Corbett wrote on his blog:

“When all is said and done, he performed far better than many of the other candidate Commissioners.”

“If you only give commissioners designate 2 weeks to prepare, on sensitive dossiers second hearings/written follow up inevitable.”

Having watched the other Commissioner hearings Hill is certainly not alone in struggling to come up to speed in such a short time. For example, the centre-right EPP group has issued a stark criticism of Commissioner-Designate for Regional Policy Corina Creţu for failing to provide details on how she will tackle the build-up of delayed cohesion payments. Employment Commissioner designate Marianne Thyssen has also taken flak for not knowing details of the posted workers directive, while proposed Digital Commissioner Gunther Oettinger was criticised for being too vague on surveillance, net neutrality and other specifics of his brief. In short, many Commissioners are struggling to tread the fine line of trying to please all sides in the European Parliament (thereby sticking to vague and uncontroversial answers).
Furthermore, let’s not forget that the outgoing Internal Market Commissioner Michel Barnier – who oversees financial services – had little to no experience of the area before he took over the post having been Agriculture Minister in France.
What happens next?
Hill’s second hearing will likely be early next week. Following the hearing another committee vote/discussion will be held on whether to approve him. These ‘votes’ are informal since the EP does not have direct say over each Commissioner, or which roles they fulfil, but only over the Commission as a whole. There are a few different scenarios over how this could play out:

1) The committee eventually approves Hill: The EP will then eventually have to decide whether to approve the whole Commission. As we have pointed out before, it seems likely that the EP will request that at least one or two of the suggested Commissioners are replaced (if only to flex its muscles). There will then be a negotiation until the EP and Commission President Jean-Claude Juncker (and member states) reach an agreement.
2) The committee does not give Hill approval but he goes ahead anyway: Since the EP cannot veto specific people or roles, it is possible they could reach a deal on the overall Commission set up even without explicitly endorsing Hill. This would certainly hamper Hill in his role since he will be forced to engage with and report to MEPs, however, it should not stop him from fulfilling his brief.
3) The committee does not approve of Hill: In this instance, the committee would fail to approve Hill even after a second hearing and would request he be replaced when they negotiate with Juncker over the final approval of the whole Commission. This would be a difficult negotiation and would raise tensions between the UK and EU. Furthermore, even Cameron were to nominate someone else, it’s not clear any UK candidate with direct financial experience/expertise would be more in line with EP thinking and sensitivities. Either way this would be a huge snub and would certainly play into the hands of UKIP and others who want the UK to leave the EU.
4) A re-shuffle: Hill is only one of several candidates who failed to impress MEPs – indeed none of the nominees so far have sailed through, with Spain’s Miguel Arias Cañete and Hungary’s Tibor Navracsics, both EPP, in trouble (as we predicted) and Slovenia’s Alenka Bratusek also facing a tough inquisition. Meanwhile, the EPP could retaliate by blocking one S&D’s nominees, with France’s Pierre Moscovici the most likely victim. As such, the FT reports there are rumours in Brussels that a “major reshuffle” could be on the cards with the same personnel being moved to ‘less problematic’ posts. There is a precedent – in 2004, Barroso agreed to swap around a couple of his Commissioners to appease MEPs. Such an approach would fit with the concerns of MEPs which seem to be more centred around the UK having the financial services brief rather than Hill himself.

However, taking financial services away from Hill (even if he is compensated with another big post like Internal Market or Competition) would also be seen as huge slap in the face for Cameron, the City of London, and the UK as a whole. This would probably be the worst outcome in terms of trying to keep the UK in the EU and would play on many of the concerns raised by UKIP.

Ultimately, the most likely scenario remains that Lord Hill is approved albeit with added scrutiny. That said, it seems almost certain the Parliament will request some changes, as it has almost always done, it remains an open question upon whom they will ultimately focus their attention.
Author : Open Europe blog team
Print