Scotland votes, Catalonia waits: Will there soon be another independence referendum in Europe?

The world is watching Scotland today, and the Catalans will watch closer than most.

Spanish news sites are featuring pictures of FC Barcelona supporters waving Scottish flags during their team’s Champions League game yesterday, and it is widely reported that delegations from the Catalan (and Basque) nationalist parties have travelled to Scotland to follow the latest developments on the ground.

This is because the debate around Catalonia’s independence referendum is approaching its own moment of truth:

Are the Scottish and the Catalan cases similar?

There are similarities between Catalonia and Scotland. Both are proud regions with long histories of independence movements, and both have also been embedded in decentralised systems. Also with respect to the consequences of leaving there are similarities, not least the prospect of joining the EU and the difficulties that could potentially arise.

However, there are at least two fundamental differences: 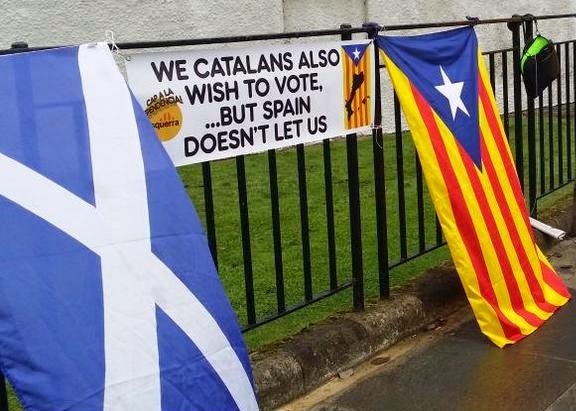 Will there be a ‘contagion effect’?

Pro-independence Catalans would no doubt get a boost in case of a ‘Yes’ victory in the Scottish referendum, whilst, naturally, Madrid would love to see the ‘No’ camp win. Irrespective of the outcome in Scotland, the status quo doesn’t seem to be an option anymore for Catalonia. Just think of the 500,000 to 1.8 million people, depending on the estimates, who took to the streets last week to celebrate La Diada, Catalonia’s National Day.

Sooner rather than later, the Spanish and Catalan governments will need to give up posturing and start talking to each other. At that point, reforming the Spanish Constitution to give regions greater power to set and collect taxes may well appear as a valid alternative. The Scottish episode, whichever way the referendum goes, may ultimately serve to accelerate further devolution in Spain.