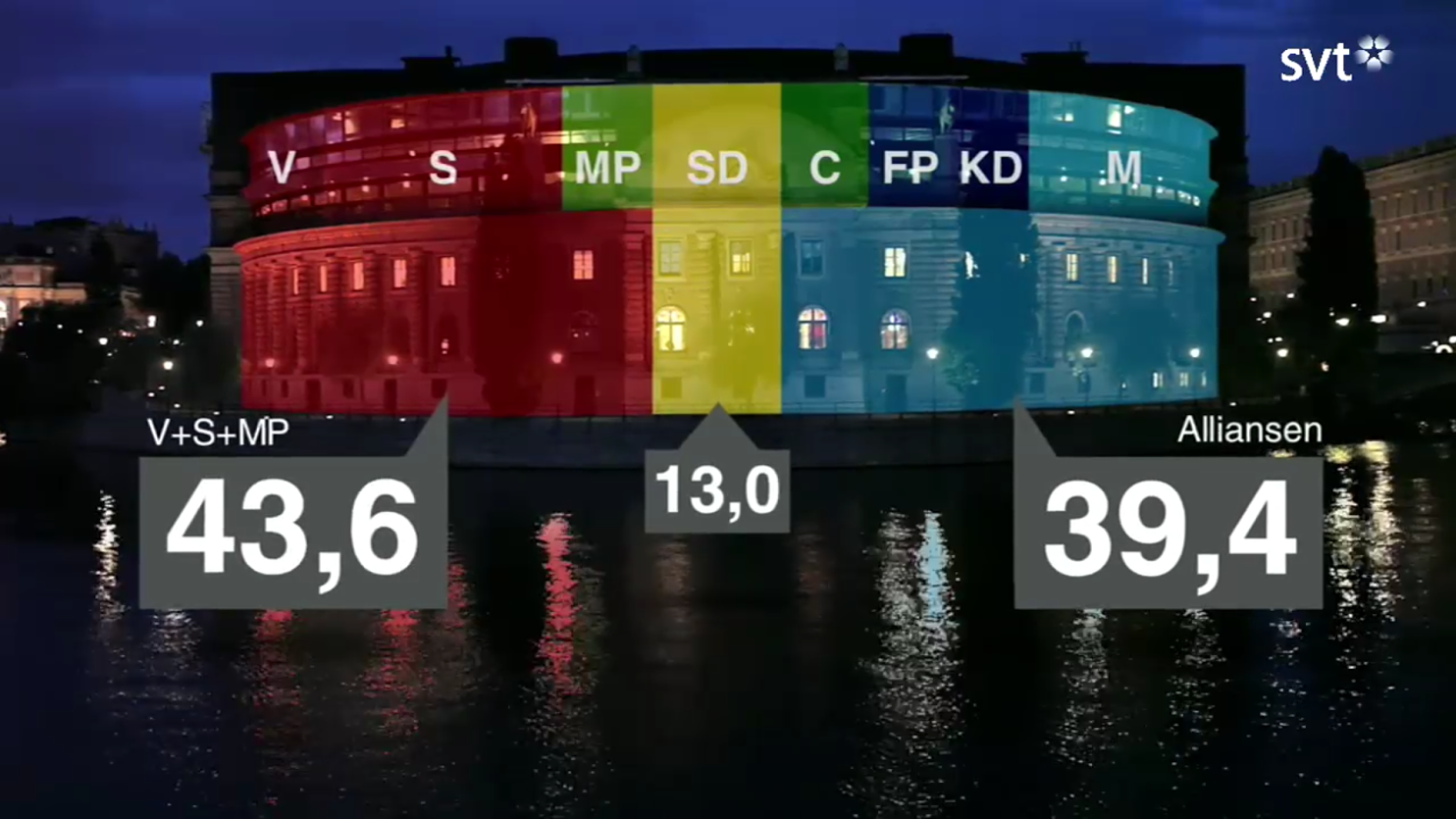 The Swedish election results were a mess. The Social Democrats and two other opposition parties, the Greens and Left, garnered 43.7% of the vote, against 39.1% for the sitting centre-right Coalition. The anti-immigration Sweden Democrats won 13% of the vote, up from 5.7% in 2010. The leader of the Social Democrats as well as two minor centre-right parties have ruled out a grand coalition, meaning that the most likely outcome is a fragile, minority centre-left government.

There’s a lot one can say about the result. Without a doubt, the big story is the rise of the Sweden Democrats. It’s fair to say that Swedish media and politicians are this morning pretty much panicking, at the prospect of SD holding the balance of power – despite an absolutely massive media campaign against the party leading up to the elections. As expected, all seven mainstream parties have declared that they won’t deal with the Sweden Democrats but, with the party now controlling 49 out of 349 seats in the Riksdag, is this sustainable? And will it hurt or help SD in future? The metropolitan elite ganging up on SD hasn’t worked well so far. In several Councils in southern Sweden, SD won around 30% of the vote, which is concerning.

Some UK media has gone with the headline “Cameron has lost a key EU ally”. Others have argued that the leftist shift in Sweden has further undermined Cameron’s prospects for renegotiation. This is not quite telling the full story. As a whole, a centre-left government including the Greens, drawing on support from the Far Left – two parties that up until recently opposed Swedish EU membership – may in fact become more Eurosceptic. Swedish unions, at least on a membership level, are a hotbed for euroscepticism. On the euro, the Left is much more sceptical than the right. Though the euro debate is dead, this matters politically as the less Sweden perceives itself as a “pre-in” (remember, Sweden doesn’t have a legal opt-out from the euro), the more sympathetic it might be to UK objectives to define the EU as a club beyond the euro. Remember, Moderaterna still had people like Carl Bildt who recently said that Sweden should and will join the euro. On issues like the EU budget, democracy and transparency a centre-left government will be just as helpful as the Reindfeldt government.

Still, a centre-left government might be less keen on free trade and dynamic financial markets, though in truth, any Swedish minority government would and will have to work hard to get through an ambitious services directive for example. And by simply belonging to a political family, the willingness to strike deals may be tempered. Also, Reinfeldt and Cameron did get along on a personal level, though that relationship was strained recently (as it became between Anders Borg and George Osborne).

Instead. the significance of the Swedish elections was the fragmentation of the centre, and the rise of an anti-establishment party, that the mainstream still has no convincing answers to. In that sense, Sweden just became a bit more European – and we don’t mean that in a good way in this instance.