What impact could this round of Russian retaliatory sanctions have on Europe?

In our continuing effort to bring increased transparency to the murky issue of sanctions we’ve compiled some initial thoughts on the likely Russian retaliatory response to the EU’s latest sanctions – published in full here and which we already analysed in detail here.

There are a few key measures which Russia is said to be considering:

With the previous round of Russian retaliation we saw uproar from the industries involved and some questionable claims for compensation – a process which now looks to have been halted. The response also seemed to weigh on the minds of certain countries, such as Finland and Czech Republic, which in turn played a role in delaying the latest round of sanctions.

With that in mind its worth delving into what impact these mooted measures could have.

In terms of exports of cars, Russia remains quite an important destination for European exports as the graph above from the European Automobile Manufacturers Association shows. In 2012 Russia accounted for 8.1% of EU exports in this sector in terms of value – around €8.7bn. Ultimately, the impact will depend on exactly how the sanctions are structured – we doubt Russia would ban all exports of cars, it could be focused on only used cars or certain types or price brackets. In terms of countries which would be hit the obvious answer is Germany, but other countries such as the UK, France, Belgium and Spain could feel the pinch (albeit on a much smaller scale). Its also important to remember that, even without any sanctions we are already seeing a sharp fall in the level of cars being exported to Russia. 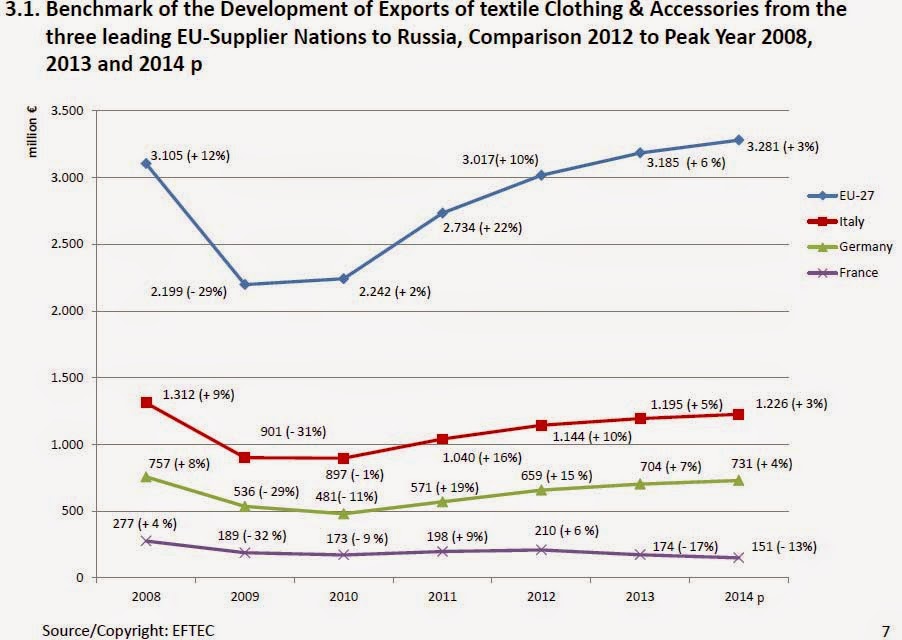 The story for clothing is similar. Russia remains quite an important export market for EU members, with exports to Russia totalling €3.185bn in 2013, making it the second largest destination for exports of EU clothing (graph above from European Fashion and Textiles Export Council). Meanwhile, as the graph below shows, the main countries exposed are Italy and Germany. This area could be particularly sensitive since we have already seen companies such as Adidas warning that the ongoing hostilities between the EU and Russia could severely hamper its business. 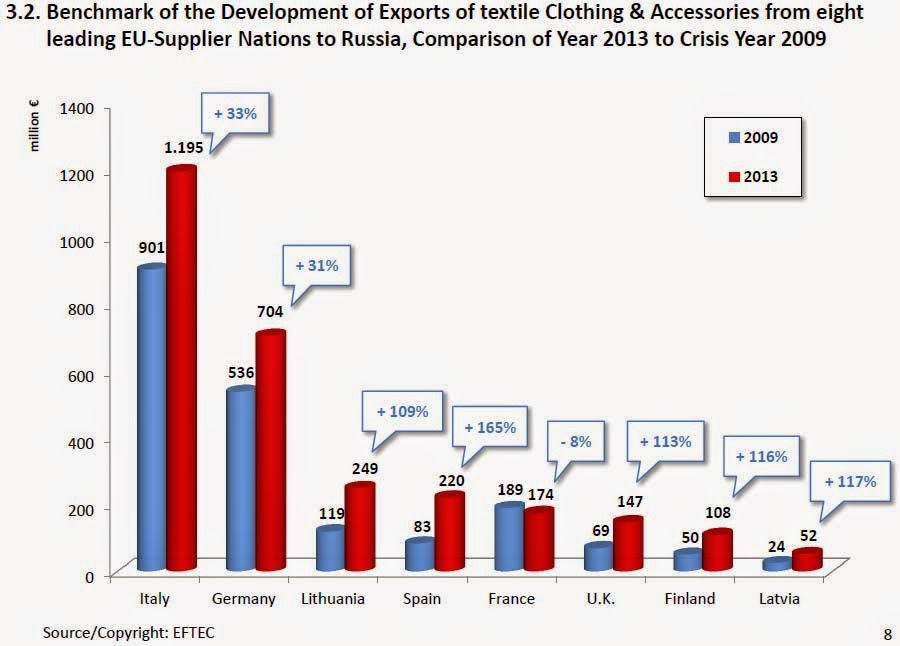 Comparing this to the previous round of retaliation, the figures do look a magnitude larger, although it does ultimately depend how broad the sanctions are and how long they last for. The potential sanctions on manufactured goods remains too vague to really assess, however, we can look a bit deeper into the airspace issue. 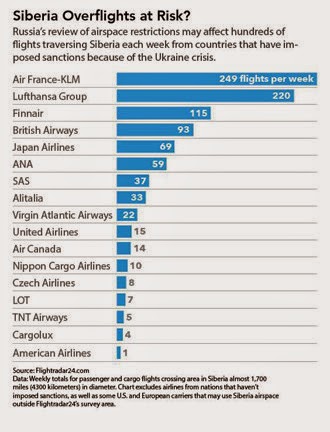 As the data to the left from FlightRadar24 (compiled by Bloomberg) shows there are lots of flights which use Russian airspace. This map from the Times, highlights that having to fly around Russia would be no small inconvenience and would certainly increase fuel costs and flying times.

So how likely are all these sanctions?

The feeling in Russia seems quite hostile this time around, compared to previously when they have more or less shrugged off the sanctions. This could be because Russia had hoped the ceasefire process would appease the EU, not least after the delay. Furthermore, the EU’s decision to target Rosneft, a key player in the energy market, may be seen as crossing a rubicon, since large energy firms had been largely off limits.

That being said, in the longer term, Russia probably has more to lose out from economic sanctions. Take for example the airspace ban – European firms pay around $185m per year for access to this airspace. Russia would also have to spend additional funds to enforce and police its airspace. Furthermore, the number of Russian flights which use European airspace is far higher, meaning a tit-for-tat sanction in this area would be particularly painful.

Some retaliation seems inevitable but Russia will still need to be cautious of further escalating the growing economic divide with Europe.