The EU last night finally reached an agreement on the latest round of sanctions on Russia, although the members agreed to delay implementation for a “few days” to allow time for the ceasefire to take hold and to reconsider the sanctions on the basis of whether the ceasefire holds or not.

This is despite the fact that by almost all accounts fighting has continued in Eastern Ukraine over the weekend and into today. However, for now, all those involved seem keen to maintain the ‘ceasefire’ and suggest the deal agreed on Friday remains in place.

First a couple of thoughts on why both sides are so keen to keep the deal in place, despite seemingly flagrant violations:

Ukrainian government: Kiev is keen to push for stability for a couple of reasons. The upcoming election is weighing on thinking and if it is ever to be seen as viable and legitimate it must take place during a calm environment. Kiev may see the ceasefire as first steps towards this. Furthermore, it seems unlikely to be a coincidence that Ukraine found a renewed vigour for the ceasefire just as the IMF warned that the prolonged fighting could lead to another $19bn bailout for the country next year. Lastly, Ukrainian forces had been suffering heavy losses as Russian forces became more involved and bolstered the rebels – this ceasefire allows Kiev to regroup and plan how to deal with this new resistance.

Russia and the pro-Russian rebels: The ceasefire came at a perfect time for Russian President Vladimir Putin – right in the middle of EU sanctions negotiations and NATO meetings – and played on divisions within the two groups. It turned attention away from what was happening on the ground in Ukraine and the potential Russian influence. It allowed the rebels to regroup and prepare to take back some more of the land they had lost in previous weeks. There also seems to have been an increasing shift towards Mariupol which looks to be a new strategic objective for the rebels.

From the EU perspective, while the official line is that they want to give the ceasefire time, the more likely influence is the concern around the economic impact of sanctions and the potential Russia retaliation. The talks over the past week have reportedly seen the reemergence of significant divisions within the EU over sanctions (although they never really went away).

While the official details are yet to be released, the sanctions have been widely reported. We discussed the options in detail here, but the key points are:

Our initial feeling is that this will be a modest increase in the current sanctions. They remain very specific and targeted on a few state-owned firms, and particularly their access to European capital markets. They also remain only forward looking. Below are a few stats to give a feeling of the impact. 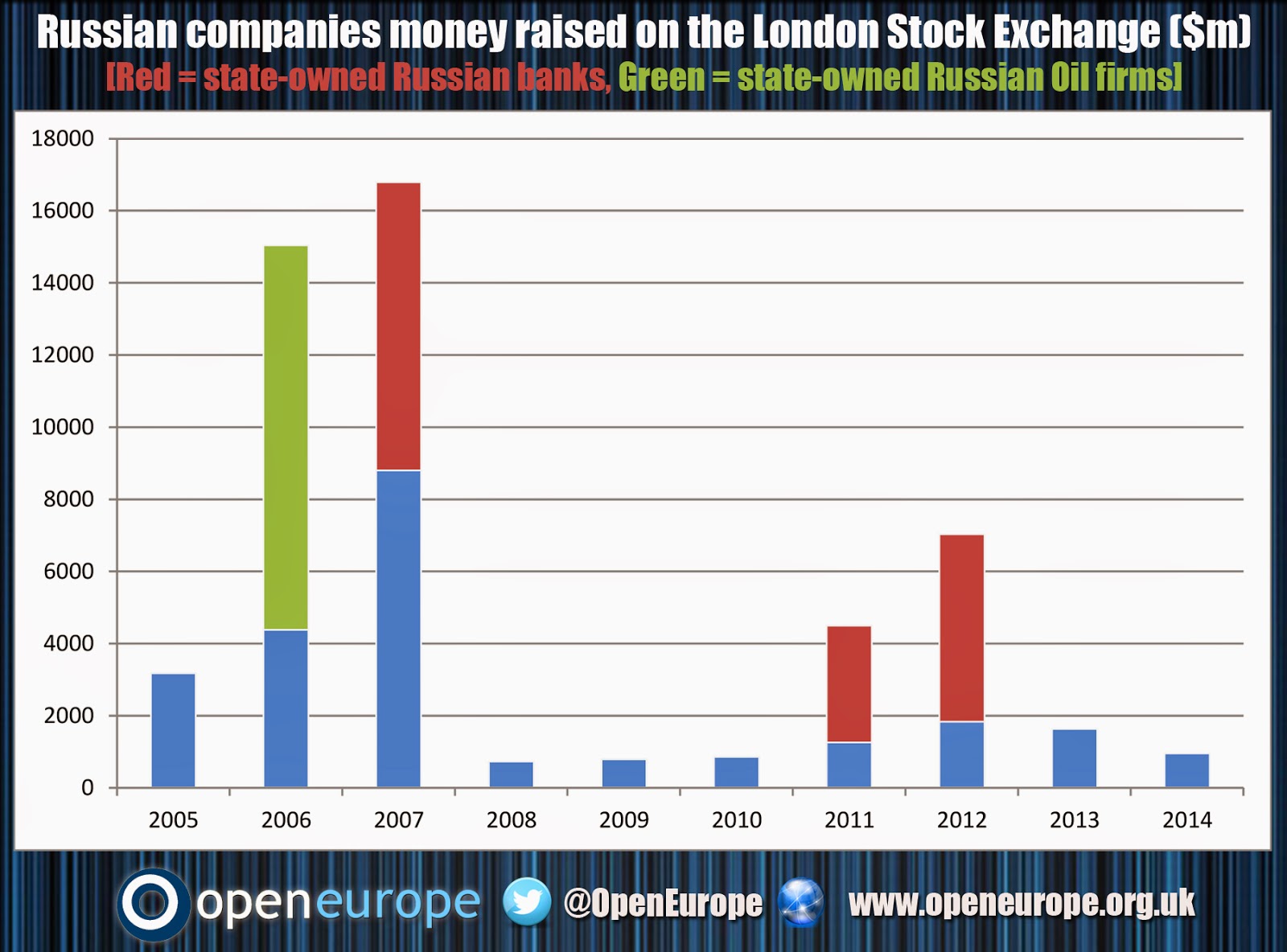 Above we have updated a graph we produced previously, which now shows which Russian state-owned banks, defence and oil firms have issued shares on the London Stock Exchange. In this instance, there is only one issuance to be added – the $10.65bn listing by Rosneft in 2006. Let’s not forget that Europe gets around 35% of its oil from Russia, and while the global oil market remains much more fungible and varied than the gas sector, hitting Rosneft is probably the main story of these sanctions.

A quick peak at Rosneft’s latest financial statement also hints at why they are so concerned by potential sanctions that they have asked the Russian state for a loan of $42bn (around RUB 1,550bn). Out of RUB 2,179bn ($58.8bn) in loans and borrowings, around RUB 1,536bn ($41.5bn) is in the form of long term bank loans in dollars and/or euros. A significant portion of this is likely to have been provided from foreign banks, meaning Rosneft could face issues rolling over these loans. Furthermore, the amount they have requested almost exactly corresponds to their net debt levels (show in the chart below) with Rosneft even admitting that the main motivation for asking for assistance from the Russia state is to help finance its net debt amid the US and EU restrictions on its market access.

One final point to note here is that the sanctions on syndicated loans could be particularly important for a company such as Rosneft, not least because it is an instrument it has used previously, for example to help finance its purchase of TNK-BP.

As with all these sanctions while the direct impact could be limited it will further add to the indirect freezing of business between the West and Russia. Furthermore, Russia looks set to retaliate once again – with the idea of banning commercial flights from the West from Russian airspace being reheated. All of this could of course be offset by positivity if the ceasefire holds – but that remains a big if at the moment.