ECB surprises markets with interest rate cut and purchases of private assets: Round-up of reactions from around Europe 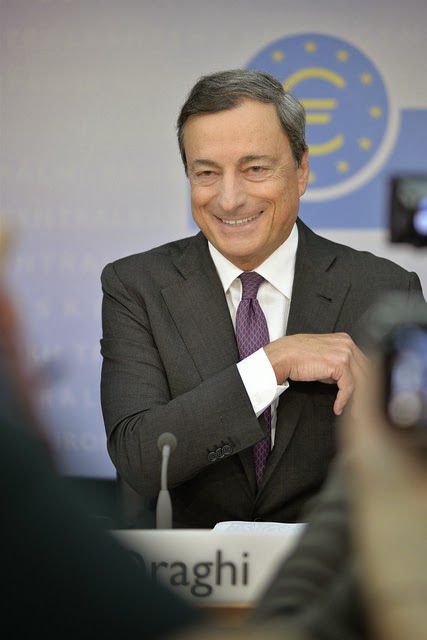 As we predicted might happen, the ECB surprised markets yesterday with the announcement of an interest rate cut and the purchases of private assets.

Open Europe’s Raoul Ruparel has a full analysis on his Forbes blog, where he concludes:

“In summation, Draghi surprised the markets with some bullish action. That said, I remain unconvinced that these programmes will do much to boost inflation, growth or even credit supply in the Eurozone. Importantly, the ECB is nearing the end of the actions it can take, and it is very aware of this. The onus has now once again been shifted to governments, with the expectations rising for action. For the first time since 2012, pressure is now really increasing for Eurozone governments to reassess the Eurozone’s institutional structures and take action to pool further sovereignty. Draghi may have come bearing gifts for markets but he came with further warning for governments.”

Needless to say, the fallout from the ECB’s announcements has been widespread and varied. Below are some of the best reactions from papers across Europe. As one might expect, the German press was less than impressed with the policies unveiled by Draghi:

Die Welt’s Economics Editor Sebastian Jost describes the announcement as “Draghi’s last roll of the dice”, and claims that the ECB has demonstrated “an unusual passion for experimentation”. He also argues that “the ECB has now done pretty much everything which appears to be economically justifiable. Whoever wants a stable monetary union should hope that it does not go any further.”

Süddeutsche Zeitung’s Economics Editor Ulrich Schäfer describes the ABS as a “highly dubious innovation”, claiming that it resembles many of the financial products that contributed to the initial financial crash “when no-one could ultimately identify who had lent whom how much, and therefore who had assumed what risk.” He concludes that it is “ironic” that the ECB wants to give such products “renewed respectability”.

FAZ’s Economics Editor Holger Steltzner criticises Italy and France for delaying structural reforms in order to get more help from the ECB. He also argues, “Does the purchase of securities, which banks are struggling under the burden of, even come under monetary policy?…How can the ECB eventually return to normal? As soon as it increases interest rates, it will threaten itself with losses.”

Again as many would have predicted, the Mediterranean press took a more sympathetic view of Draghi’s decisions.

An editorial in Spanish daily El País argues that “the ECB hasn’t disappointed…[but] it’s equally necessary that the governments with sound public finances – and notably the German government – intensify investment and temporarily back greater flexibility in the necessary requests for public finances adjustment in the eurozone as a whole.”

The deputy editor of Spanish daily El Mundo, John Müller, makes an interesting point, “The enormous debt – both private and public – that has been amassed, is such a huge burden that it is surprising that no-one is addressing the problem seriously…Yesterday, Draghi only asked for help [from eurozone governments] in the form of fiscal measures and reforms, but not [in the form] of debt restructuring. In short, we don’t know if the monetary sorcerer has correctly identified the reason why we have lost the favour of the gods of growth.”

Columnist Jean-Marc Vittori writes in French business daily Les Echos that “the currency won’t be enough to save Europe”, and argues, “[There’s] no tenable monetary union without budgetary union. In a continent where the temptation to withdraw is growing, this appears to be a challenge. Nonetheless, it’s the condition for the survival of the euro.”

Italian Economics Professor Donato Masciandaro writes in Il Sole 24 Ore, “Draghi couldn’t have been clearer: the later the necessary fiscal and structural policies come, the less effective monetary policy will be…Such a decisive statement should make everyone reflect. The [European] Union is like a bogged-down machine. It has at least four traction wheels – currency, taxation, competition and labour – but only one of them is working. In such a situation, the machine risks going under.”

Italian journalist Danilo Taino writes in Corriere della Sera, “[Italian Prime Minister Matteo] Renzi is a lucky guy, since no [Italian] Prime Minister ever got this sort of help from the ECB. This means, however, that [Renzi] won’t be able to ask for anything else from Draghi. The ECB President has reached the extreme limit – except for a difficult, potential government bond-buying programme. From now on, everything is in the hands of governments.”

One interesting take away, particularly from the articles from around the eurozone periphery, is that there seems to be a renewed push for measures such as further budgetary union and debt-pooling. It looks as though there is a growing acceptance of the limitations of ECB action, and the continued flaws in the Eurozone architecture – something which we have long warned of.