ECB preview – Dovish Draghi to double down on easing? 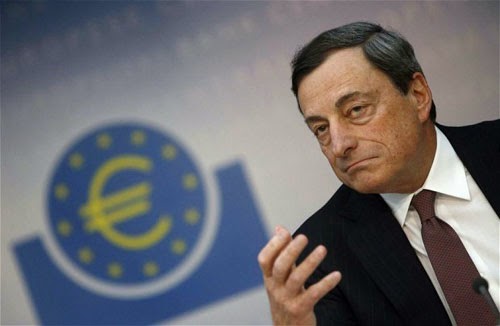 As usual, Open Europe’s Head of Economic Research Raoul Ruparel has published a preview on his Forbes blog, explaining what we may expect from today’s meeting.

Following ECB President Mario Draghi’s dovish speech at Jackson Hole last month this week’s ECB meeting has taken on new importance. This has been further enhanced by the recent Eurozone inflation data which put annual CPI at 0.3% in August. The headline figure hides some of the story with core inflation actually rising to 0.9% (from 0.8%) but the ECB’s previous inflation forecasts have begun to look increasingly out of line with reality.

However, those expecting a big move are likely to be a bit disappointed. As I pointed out last month, it is almost nonsensical for Draghi to unveil new measures before his previous policies have been implemented. I am thinking specifically of the TLTROs (targeted long term lending operations) the first of which will only be conducted on 18 September. Any big announcement now could undermine the predicted take up of these measures – which clearly remain the ECB’s preferred approach for injecting further liquidity.

That being said, these measures are unlikely to make much difference since the conditions for passing liquidity on to the real economy remain very loose. They are also very unlikely to appease investors and markets which have now come to expect some significant new easing. The two key options which are on the table for this meeting are:

As with many of Draghi’s press conferences, all of this will be weaved into a dovish speech including a few key trigger words for markets – few other central bankers are as adept in their communication. As for full blow Quantitative Easing on sovereign debt, this remains someway off in my mind and hurdles remain high. Its use will ultimately be tied into developments in the fiscal and political sphere, as hinted at in Draghi’s speech (more detail on this coming in a future post). The ECB will be loath to unveil QE, which it fears can only buy time, without further commitment to reforms, a clearer fiscal approach and developments on the structure of the Eurozone which such changes will entail.