The CDU’s ‘AfD problem’: too big to ignore, too controversial to team up with 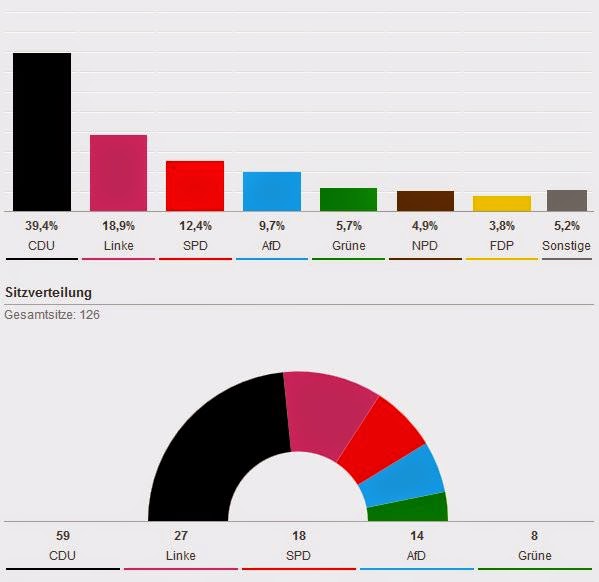 Yesterday’s regional elections in Saxony saw Germany’s anti-euro Alternative für Deutschland (AfD) score an impressive 9.7%  netting the party its first ever seats in one of Germany’s regional parliaments. The lead candidate of the Green party, Antje Hermenau, described the AfD result as an “earthquake” while AfD leader Bernd Lucke celebrated that they “finally arrived on the German party landscape.”

It is now up to German Chancellor Angela Merkel’s CDU party to find a new coalition partner after Saxony’s FDP followed the national party in losing all its seats. The CDU’s lead candidate and current Prime Minister of Saxony, Stanislaw Tillich, categorically excluded a potential coalition with the AfD describing it as a protest party that due to its inner turmoil was completely unfit to govern. He only waited until after the election result was announced to make this statement however, following a debate within the CDU which continues.

Commenting on the prospects for a CDU-AfD coalition, Bild columnist Bela Anda writes that if it were to enter into a coalition with the AfD,

“The CDU would saw off the branch on which it itself is sitting.”

A CDU-SPD grand coalition is therefore the most likely option although a CDU-Green coalition could also be on the cards.

So is the AfD ‘Gekommen um zu bleiben’ (here to stay)?

This is not only the title of a famous German pop song but now the question everyone is asking themselves. Regional elections in Thüringen and Brandenburg are coming up in two weeks and the AfD has a good chance of enter both regional parliaments. However, the party’s objective remains winning Bundestag seats in 2017 having narrowly missed the 5% threshold in 2013. There will be another eleven regional elections before 2017 and the challenge for the party will be to keep the momentum going. The AfD leadership will no doubt remember the fate of the Pirate party in 2011 – polled at a spectacular 13% before plummeting into virtual non-existence.

In Saxony a large share of AfD vote came from ‘Sonstige’ (other parties) and ‘Nichtwähler’ (non-voters) which is typical for protest parties. But at the same time there is a considerable spread across most mainstream parties with the largest share coming from the CDU (34,000 votes). 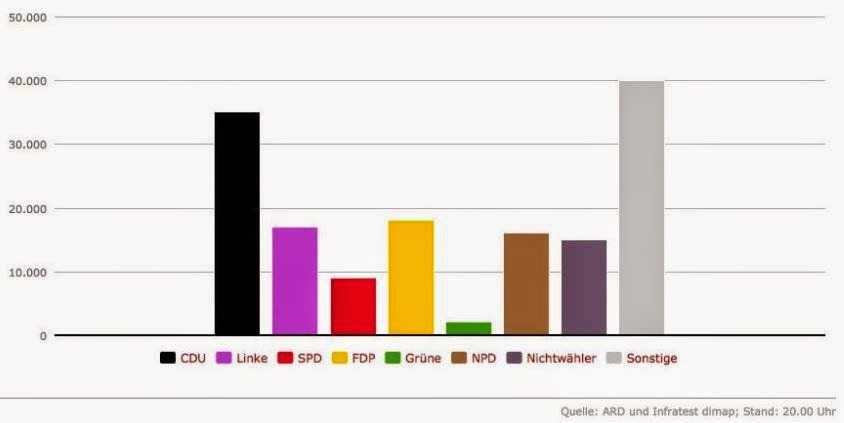 This would be a particular headache for Angela Merkel’s party. The worst case scenario for Merkel is that the AfD becomes to the CDU what Die Linke is to the SPD – and indeed, some would say, UKIP to the Tories in Britain: too big to ignore, too controversial to team up with. This headache will become particularly severe if the liberal FDP’s decline is irreversible, dooming the CDU to always have to look to the SDP (or the Greens), in turn making left-right coalitions more or less a permanent feature of German politics.