Headlines are all for AfD and UKIP, but the biggest shocker for traditional parties may come from Spain…

The surge of anti-EU, anti-euro and protest parties across Europe continues. Germany’s anti-euro Alternative für Deutschland (AfD) is making headlines after winning 9.7% of votes in yesterday’s regional elections in Saxony and securing its first ever seats in one of the country’s regional parliaments.

In the UK, a Survation poll for the Mail on Sunday found that, following the defection of Douglas Carswell from the Conservatives to UKIP last week, UKIP is set to win the ensuing Clacton by-election with 64% of the vote – which would grant Nigel Farage’s party its first elected MP.

However, the biggest shocker for mainstream parties seems to be coming from Spain. According to a new Sigma Dos poll for El Mundo, the anti-establishment (but not anti-EU) party Podemos would finish third in a general election with 21.2% of votes – only 1.1% less than the opposition Socialist Party. Being neck-and-neck with one of Spain’s two traditional parties is an absolutely extraordinary result for Podemos, given that it was founded in March. The poll puts Spanish Prime Minister Mariano Rajoy’s centre-right Partido Popular in the lead on 30.1% – a 14.5% fall from the 44.6% the party scored at the November 2011 general election (click on the picture to enlarge). 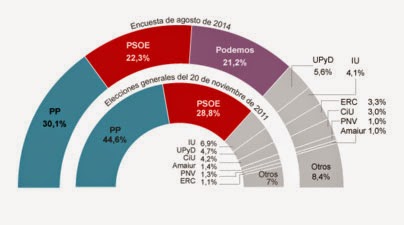 If you didn’t read it at the time, here is a portrait of Podemos and its leader, Pablo Iglesias, that we published in the aftermath of the European Parliament elections in May – when Podemos came from nowhere to win five seats in Strasbourg. We noted:

Call it left-wing, anti-establishment, anti-austerity (but clearly not anti-EU), the rise of Podemos is significant because – similar to what the Five-Star Movement has done in Italy – it can give Spaniards a channel through which they can voice their dissatisfaction with the political establishment (and the current eurozone economic policies), something which has been lacking at the peak of the eurozone crisis.

Indeed, looking at the latest polls, Podemos seems to be following exactly the same trajectory as Beppe Grillo’s Five-Star Movement in terms of rocketing (potential) electoral support. And exactly as in Italy, the rise of a strong anti-establishment party may well force the centre-right Partido Popular and the Socialists to consider an unusual (and uncomfortable) ‘grand coalition’ if none of the two big traditional parties wins a majority in the next general election – due in November 2015.

While the speed of the rise of Podemos is certainly surprising, there has undoubtedly been a huge gap in the market for a protest party in Spain over the past few years – as we noted on this blog at the end of May. Despite sky-high unemployment, a struggling economy, a few political scandals and regional discontent, no party or movement had so far managed to shake the solid support for the two mainstream parties. But since Podemos entered stage, things seems to have changed. With a Catalan independence referendum potentially coming up in November and thoughts turning towards next year’s general election, these are certainly interesting times in Spanish politics.