Is Germany emerging as the biggest obstacle to a liberal EU-US trade deal? 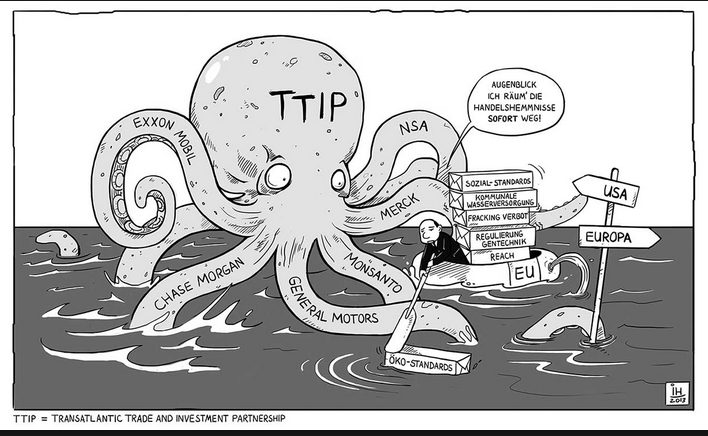 If you read our press summary, you will have noticed that the debate around the US-EU free trade deal (TTIP) is really picking up in Germany, with even the euro-critical AfD coming out against key elements of the deal ahead of the European elections.

Of all the mainstream newspapers in Europe, Süddeutsche Zeitung is the one that has devoted the most time and effort into covering the on-going negotiations over TTIP, and it has also published a number of comment pieces – both for and against.

In an opinion piece today, the paper’s Economics correspondent Alexander Hagelücken argues that the debate around the EU-US free trade agreement (TTIP) has become “schizophrenic” amid mounting public opposition (as highlighted by the cartoon above). However, he argues that:

“European governments can escape the impasse by making it clear that they want to expand free trade via the TTIP principle while at the same time meeting the legitimate concerns of their citizens who do not want increased prosperity at the cost of losing environmental and health standards. GM foods? Only after passing the European approval procedure and with clear labeling. Investor lawsuits against environmental legislation such as Vattenfall’s legal challenge against the nuclear phase-out? Not before secret tribunals, but only in the ordinary courts.”

“Yes, such a path would not lead to unfettered capitalism with a neoliberal flavour but free trade with constraints. In other words, it would be the kind of social market economy which has given the [German] Federal Republic decades of prosperity after World War II, while tensions decreasing rather than increasing tensions between the social classes.”

German public opinion will be a crucial factor in determining the success or failure of the TTIP negotiations. As with everything else these days, we suspect, on TTIP, as goes Germany, so goes Europe.
Author : Open Europe blog team
Print