An Infratest Dimap poll for Welt/ARD published today showed that 70%  of Germans are in favour of the EU’s response to the crisis, with 80% thinking that Russia bears the biggest responsibility for the break-down in relations between Russia and the West, and with a slim majority (49% vs 46%) in favour tightening sanctions further, even if it has a negative impact on the German economy and jobs.

Being as ever nervous about meddling too much in world affairs, there’s been a considerable shift in the German media and public-opinion regarding Russia. In March, after the annexation of Crimea, only 38% supported economic sanctions. By May this had risen to 50%. Now it’s at 70%. The volte-face can be explained in part by some industry bodies publicly announcing that they would be able to weather such sanctions and the public outcry over the MH17 tragedy.

As has been noted by others, Angela Merkel was absolutely instrumental in breaking the deadlock over the sanctions, by showing willingness for Germany to bear a large chunk of the costs. This probably wouldn’t have been possible absent the shift in public opinion (incidentally also illustrating how the “as Germany goes, so goes Europe” rule now increasingly also applies to foreign policy).

However, there’s still plenty of opposition from within Germany. Business continue to warn against loss of jobs and profits. And today, Gabor Steingart, Editor-in-chief of Germany’s financial daily Handelsblatt, laments “The folly of the West,” for entering into “the politics of escalation” with Russia, on the front page of his paper today, writing: 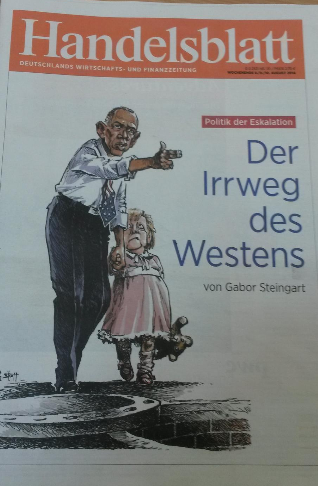 “With its politics of escalation, Europe is missing a realistic [end] goal… Even the aim to bring Russia to its knees through economic pressure and political isolation, has not been properly thought through.”

“Even if this were to work: What good will that do? How can one expect to live alongside a demeaned people in the European house, when their elected-leader is treated like pariah, and their citizens may be committed to soup-kitchens in the coming winter?”

As Steingart sees it:

“German journalism has switched from level-headed to agitated in a matter of weeks. The spectrum of opinions has narrowed to that of a sniper’s scope… Headlines betray an aggressive tone that is usually characteristic of football hooligans.”

There is clearly a growing gap in the German media, politics and public between those who want to go in harder on Putin, and those who favour Germany’s ‘Ostpolitik’ tradition of bridge-building with the Kremlin. In turn, this reflects that on-going, grinding and drawn-out debate about Germany’s role in Europe and the wider world, in which all kinds of German instincts clash.