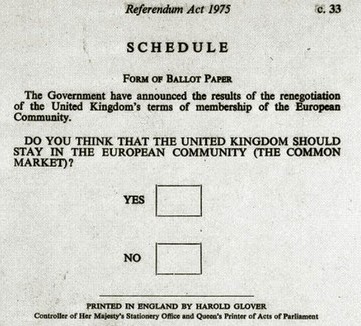 The Foreign and Commonwealth Office has published a previously confidential account of the 1974-75 renegotiation of the UK’s EU membership under Harold Wilson’s Labour Government. That renegotiation largely resulted in only token concessions to Britain – greater imports of New Zealand butter being chief among them. They were however enough to secure an In vote of just over 67% in 1975.

The account, written in 1975 by Nicholas Spreckley, then head of the FCO’s European department, is a hugely interesting read. Some of the similarities to the situation David Cameron finds himself in are striking, although there are major differences in today’s environment, such as a much less deferential media, a greater flow of information, far more actors in the space (including think-tanks), which means the public will be far better placed to assess the success of any negotiations.

Still, the politics described are remarkably similar to those of today. Consider this passage:

“The Germans, the Dutch and the Danes seemed the most sympathetic to British objectives…But as so often, it was the French attitude which was at once the most important and the most critical. In these early weeks the French government took the line that the Treaties and the principles of the Community were inviolable.”

The most important figure was then German Chancellor Helmut Schmidt, who proved willing and keen to be helpful in addressing British concerns. France, however, was hard work and largely unhelpful.

There are also strikingly similar disagreements about the budget, and the UK’s contribution to it, the frustration of UK ministers to fundamentally alter the CAP, and so on.

There are however some clear differences in approach between then and now. The 1970s negotiators were extremely cautious and ruled out treaty changes at an early stage – due to the small of number of such changes, this was seen as a radical option in the UK and among the eight other member states. However, David Cameron is on the record as saying he wants treaty changes as part of his negotiations.

As Sir Stephen Wall writes in his foreword, the “past is a different country”, and with over 40 years of collective memory of the EU – added to the famous British cynicism – Cameron is unlikely to be able to pull off the Wilson trick with the British public this time around.