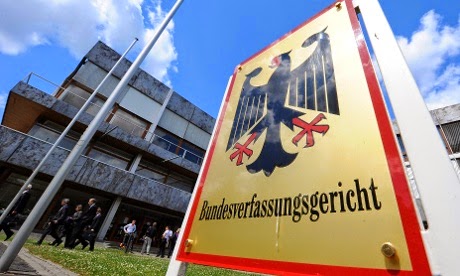 It emerged over the weekend that five German academics have launched another challenge at the Bundesverfassungsgericht – the German Constitutional Court (GCC) – this time against the proposals for a banking union based on the Single Supervisory Mechanism (SSM) at the ECB and the Single Resolutions Mechanism (SRM) at the Commission, with a Single Resolution Fund (SRF) set up via a separate intergovernmental treaty.

For background on all these institutions, see these links: SSM, SRM & SRF.

One of those bringing the complaint is Prof Markus Kerber of Europolis (who has been heavily involved in previous suits). According to the press release the key point of the challenge is:

The group are far from alone in raising legal concerns surrounding the basis for the banking union. As we have previously noted, both the German government and the European Parliament have expressed legal concerns over the structure; the former with regards to the fiscal impact and the legal basis for pooling of funding and the latter with regards to the use of intergovernmental treaties and the circumvention of the EP. (Ironically, such intergovernmental agreements arose in large part to avoid Germany’s original concerns).  The German government’s concerns have also been mostly dismissed by the Council legal service previously.

The UK Government has also made noises about concerns around the use of the single market article (114) to create a new eurozone architecture.

As the FT notes, these cases take some time to work their way through the system and the GCC has shown a track record of generally siding with the EU, albeit often with some caveats.

Given said track record and the previous opinions expressed by the Council legal service, we can’t help but feel the outlook is already dim for this challenge. As with all eurozone policies, overturning it would likely cause huge market disturbance and shift the eurozone back towards an existential crisis – something the court is usually quite aware of.

That said, the court could add caveats in terms of the democratic assent required for banking union and the role of the Bundestag where funds are concerned. It could also pass the judgement onto the European Court of Justice, as it has done with the case over the ECB’s bond purchase programme the OMT, not least because it seems to mostly question the legality under EU treaties.

In any case, this is certainly one to watch and not just from the eurozone perspective. Any ruling could well set a precedent and have a role in determining how far the eurozone can push certain treaty articles in terms of legal bases but also how it fits with national constitutions. In other words, it could be important in determining the issue of euro-ins vs. euro-outs as the EU develops.