The EU’s possible new sanctions on Russia: What ‘burden sharing’?

As we noted in our previous blog on the potential ‘Stage 3’ of EU sanctions on Russia, the options considered by the European Commission and the EEAS seem heavily focused on financial markets, raising the question of whether London would have to shoulder too much of the burden.

Between 2004 and 2012, a total of USD 48.4 billion was raised through IPOs in the EU by companies incorporated in Russia. Out of those, USD 16.4 billion was issued by state-owned financial institutions.

However, what the memo does not say is that all those deals took place in London – as data from the London Stock Exchange show quite clearly. 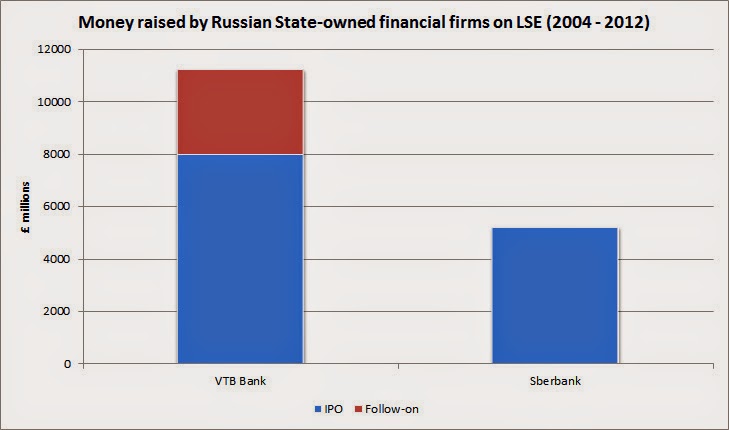 As the graph above shows, VTB (twice) and Sberbank have raised $16.4bn from IPOs (and follow on issuance) in London. This seems to correspond (or even outstrip) the figure cited in the EU document. Furthermore, the total value of IPOs from Russian firms also comes from London, since it stands at $48.96bn (between 2004 and 2012).

The spread of debt securities seems a bit wider, and data are harder to find. However, it is a good bet that quite a few were issued or at least cross-listed in London.

Ultimately, this is not ‘make-or-break’ for London. The fees from debt and/or equity issuance and stock listings are a nice income, but not huge in terms of the City. We would expect the figure to be within the hundreds of millions maximum. It’s also worth remembering that any sanctions are likely to be only forward looking so relating to new debt and equity issuance not existing stocks (although this is still up for grabs in the negotiations).

Hence, as we asked in our previous blog, the real question is why is so much of the burden (even if it is not a massive one) falling on the UK? France and Germany might be talking tougher, but they do not quite seem to be following through with actions.

*(Update: We have seen an updated version of the document which has the exact $16.4bn figure, and so have updated it in the text above).