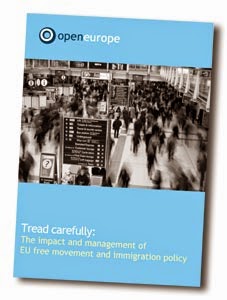 Today, the UK Government has published the third batch of its reports reviewing the ‘Balance of Competences’ between the UK and the EU. We have noted before that many of the previous reports, whilst interesting on much of the detail, have for various reasons turned out to be rather disappointing and dodged the major questions facing Britain in the EU, so how do today’s tomes compare?

Most interestingly, the controversial, and much delayed, report on the free movement of persons has finally been published and, unlike many of the previous reports, it is much clearer about the Government’s thinking in what is one of David Cameron’s primary targets for renegotiation. The report, which was trailed in today’s papers and quotes extensively from our submission to the consultation, which you can read in full here, makes the following points:

Specifically regarding the existing rules on EU migrants’ access to welfare, this is the key passage:

“The Government considers that now is an appropriate time to review the EU level rules with a view to modernisation and ensuring they are fit for purpose in the EU of today. The rules have evolved beyond the original scope as the EU has evolved and the interaction between rules on residence and social security coordination becoming increasingly complex. This complexity has led to an increasing number of challenges through the ECJ, creating uncertainty and, in the majority of cases, weakening the ability of Member States to determine how their systems operate.”

“Without reform, legitimate public concern about how EU migrants access social security in other Member States is likely to significantly undermine support for the principle of free movement.”

This is the most explicit any of the BoC reports has been about the need for reform and, while there is no settled policy prescription (the report discusses OE’s and David Goodhart’s reform proposals at length), the key issues have been clearly identified.

This is apparently the third iteration of the report, following several rounds of coalition ping-pong. Nevertheless, it highlights the degree of cross-party consensus on the need for reform of benefits rules – which Labour has also called for. It would however be intriguing to know what was cut in the various edits.

We will be leafing through the other reports published today and will return to them on the blog later this afternoon.