EU leaders fail to agree on the remaining top jobs. Anything to remember from yesterday’s summit? 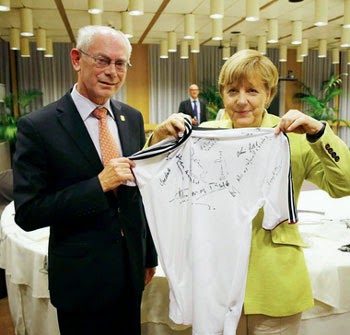 Yesterday’s European Council summit ended without an agreement on the remaining EU top jobs. However, something interesting still came out of the meeting.

A socialist (and a woman?) for next EU foreign policy chief

EU leaders appear to have established that the next High Representative for EU foreign policy will be a centre-left politician. German Chancellor Angela Merkel, French President François Hollande and Italian Prime Minister Matteo Renzi all said it in the respective post-summit statements.

Renzi, who is pushing for Italian Foreign Minister Federica Mogherini to get the job, also stressed that, “Everyone agrees that there’s no other candidacy than Italy’s.” Hollande added that the High Representative “will necessarily be a woman, taking into account the image of Europe we have to offer”. The French President also made clear that he backs Mogherini’s candidacy.

The next European Council President will be appointed by unanimity, and could be one of the 28 sitting EU leaders

As Hollande put it during his press conference, the next European Council President “will be a personality that will have to gather consensus”. Similarly, Merkel said, “We need a personality…who can hold us 28 together.”

“Hollande said that, according to him, the next European Council President has to be one of the 28 [sitting EU leaders]. It doesn’t matter whether [he/she is] from the eurozone or not. He got broad support [for this idea].”

Speaking after the summit, Polish Prime Minister Donald Tusk confirmed that his name has been informally floated for the post of European Council President (an option we discussed here and here), but that he had not been approached officially.

Tusk reiterated that he would prefer to remain in Poland, but then added:

“We have to play out a complicated game and sometimes in this game the argument goes that all options remain on the table. Therefore, if you ask me if this is impossible, I will say that in the negotiations I prefer to keep every eventuality in reserve in order to achieve the maximum that Poland could possibly achieve.”

And that was it. EU leaders will meet again on 30 August to try and wrap up a deal. We will be monitoring the meeting very closely, despite it being on a Saturday.