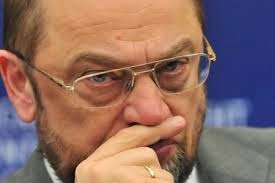 If you read our press summary this morning (if not, do sign up!) you would have seen – before anyone else outside Germany incidentally – that Lord Hill, the UK’s nominee for EU Commissioner, is already at risk of becoming a victim of an increasingly assertive European Parliament.

He was seen as too federalist, and someone who would only give Ed Miliband additional headaches shortly after Labour ruled out an In/Out referendum. He’s had a rough ride in the UK over the Spitzenkandidaten, where he clashed head on with the Tories and most other British people. He may now take his revenge.

Speaking to Deutschlandfunk radio this morning, he said of Lord Hill:

“I cannot imagine that, with his radical anti-European views, provided that he has them, [Lord] Hill can get a majority in the European Parliament…It will become clear if Mr Hill approaches us without prejudice, and that will certainly influence whether or not he gets a majority.”

The European Parliament cannot formally reject individual Commissioner-nominees, but can veto the entire European Commission. Therefore, MEPs have de facto ‘blackmailing powers’ to pick off individual nominees. Interestingly, Schulz added that a rejection of Lord Hill in such a way “cannot be ruled out”.

In fairness, Schulz was asked a clearly leading question when making these comments:

So, is this posturing or is Schulz meaning business? Well, as for now, we should treat the comments with caution. Even if Schulz is serious, he will need to get a majority of MEPs to agree that Hill should be rejected on basis of “radical anti-European views, provided he has them”. Hill isn’t exactly on record spewing out Farage-type anti-EU slogans. The point about Lord Hill is that he’s a very different type of political operator altogether: he’s someone who strikes deals, rather than engaging in shouting matches or trading in platitudes.

Schulz will struggle to build a case on this one – not least since Lord Hill seems like exactly the type of pragmatic, deal-maker type person MEPs should like. Still, it’s a strong statement from Schulz.