Are things heading towards a showdown on the new EU foreign policy chief? 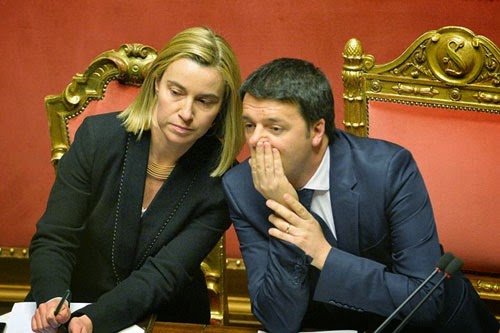 UPDATE (18:20) – The FT‘s Peter Spiegel and Alex Barker are reporting that Belgium’s Karel De Gucht, currently serving as EU Trade Commissioner, could be a late entry into the race for High Representative.

Like former Estonian Prime Minister Andrus Ansip (see below), De Gucht is a member of the liberal ALDE family – that has joined the ‘grand coalition’ supporting Juncker in the European Parliament and now looks to be asking for something in return.

EU leaders will meet in Brussels tomorrow to get on with the assignment of the remaining top jobs. Priority will probably be given to the appointment of the EU’s new foreign policy chief (aka High Representative for Foreign Affairs and Security Policy).

Italian Foreign Minister Federica Mogherini is still regarded as the frontrunner for the job. However, things may not go as smoothly as initially thought. Sources close to European Commission President-elect Jean-Claude Juncker have told Italian news agency ANSA that “ten-eleven [EU] countries” are currently against Mogherini’s appointment.

The sources didn’t name any names, but it is understood that Eastern EU member states are particularly reluctant, since they believe Italy did not take a hard enough stance against Russia during the Ukraine crisis.

The Lisbon Treaty establishes that, similarly to the European Commission President, the High Representative is appointed by EU leaders under qualified majority. And Italian Europe Minister Sandro Gozi has made clear Italy is prepared to go to a vote. He said:

“[The appointment of] Juncker is part of an agreement whereby the High Representative goes to the socialists.”

“Juncker has been designated by [qualified] majority. No-one ever raised objections [against Mogherini] with us. If there were any, that would mean the High Representative will also be designated by majority.”

Therefore, things may be heading towards another showdown. This time, though, the outcome of the vote could be a lot more uncertain. A group of ten or eleven countries (very likely to include Poland, a qualified majority heavyweight) would have good chances of success in forming a ‘blocking minority’ to reject Mogherini’s appointment. That would be a blow for Italian Prime Minister Matteo Renzi, who seems to be investing a good deal of political capital trying to secure a post that he considers as of great prestige. But it could also shift the balance in the distribution of the other top jobs – notably the Presidency of the European Council.

Mogherini is from a centre-left party. This means her appointment would make it less likely for Danish Prime Minister Helle Thorning-Schmidt, another centre-left politician, to succeed to Herman Van Rompuy as European Council President. However, this argument could no longer be valid if the new High Representative were to come from a centre-right party.

This would be the case with Bulgaria’s Kristalina Georgieva, who looks to be gaining momentum as an alternative to Mogherini, although, as our dove-hawk axis showed, Bulgaria has so far also been quite soft on Russia.

Another option could be to offer the post of European Council President to someone from an Eastern European country in order to assuage opposition to Mogherini. Polish Prime Minister Donald Tusk could be an option, although with Polish domestic politics in a precarious state he may prefer to stay put. In that case, former Estonian Prime Minister Andrus Ansip – who has already been nominated as Estonia’s next EU Commissioner – could be one to watch. Ansip’s Estonian Reform Party belongs to the liberal ALDE group, that has joined the ‘grand coalition’ supporting Juncker in the European Parliament and would presumably be keen to get something substantial in return.

In other words, a few surprises may come out of tomorrow’s European Council. Stay tuned.