What sparked yesterday’s renewed concerns around the eurozone? 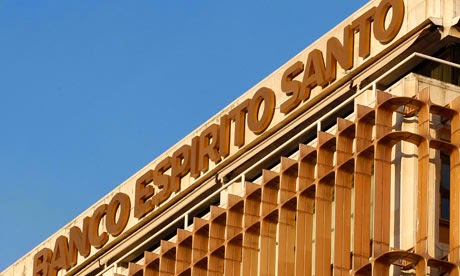 Over on his Forbes blog Open Europe’s Raoul Ruparel provides a comprehensive analysis of the renewed concerns around European banks, centred around Banco Espirito Santo (BES), which saw stocks falling across Europe yesterday. The full post is here and reproduced below.

Firstly, there’s no doubt there are some valid concerns surrounding BES, the key ones of which are:

All this culminates into some very real concerns. While there are plenty of unfounded rumours flying around, the fact is they are hard to disprove because the structure of the bank and its affiliates is so maddeningly complicated. The exposure has also been continuously underestimated and hidden so it’s only right to ask, what else might they be hiding?

But all of these are very specific BES problems, why has this suddenly sparked Europe-wide contagion. I believe there are a few factors behind this:

There are clearly some lessons in this situation for eurozone investors and they would do well to remember the short comings in the eurozone architecture, particularly when it comes to the banking sector which is yet to be cleaned up even after six years of crisis. That said, given the specific nature of the problems it is unlikely to mark a huge turnaround in market sentiment. Sure, the market will pull back a bit but we still have the injection of the new ECB lending operations (TLTRO) to come and the hope of some positive data on the GDP and inflation front.

One final point out of all of this is to watch how BES does in the upcoming ECB Asset Quality Review (AQR) and bank stress test. If it is not seen to have been rigorously assessed and problems highlighted then serious questions will begin to be asked about the credibility of an exercise. Now, the failure of the AQR would really be the start of bigger problems for the eurozone.