Will the real Jean-Claude Juncker please stand up? 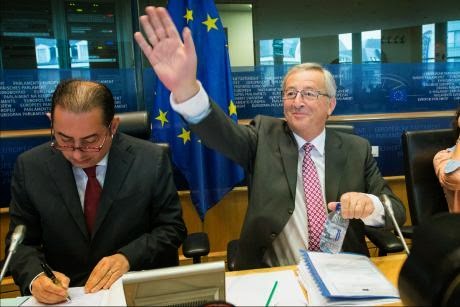 This week, Jean-Claude Juncker conducted his tour of political groups in the European Parliament in a bid to get their support for him to succeed Barroso. On this occasion, German social democrat MEP Udo Bullmann stressed:

“Mr. Juncker will have to present concrete ideas over how he will address the massive investment gap, the creeping de-industrialisation of Europe and the social distortions. We will not be won over with empty phrases or with recycled ideas. There is too much at stake for people to do that.”

We’re not sure how confident Mr. Bullman can be, given that Juncker gave a masterful display of how to be all things to all men and women, finding the right things to say to placate everyone from conservatives to communists. Here is an overview of some of the highlights.

Juncker is not a federalist after all…

Juncker: Why do you call me a federalist? I am not a federalist. I do not believe in the United Staes of Europe.
— ECR Group (@ecrgroup) July 8, 2014

… but favours at the same time shifting more powers to Brussels:

“I am partisan of own resources to end eternal battle between Member States at every negotiation of financial framework.” #ALDEasksJuncker
— ALDE Group (@ALDEgroup) July 8, 2014

#JunckerTest @JunckerEU the Commission must be open to using Article 7 if a member state breaches EU fundamental rights
— Greens in the EP (@GreensEP) July 9, 2014

He is is in favour of “budgetary rigour”…

Juncker: I am not saying I am a proponent or opponent of austerity, but I do like budgetary rigour. You can’t spend what you don’t have.
— ECR Group (@ecrgroup) July 8, 2014

…but not “excessive austerity”

He promises the Socialists the Economic and Monetary affairs portfolio…

Juncker: stability pact will not become a flexibility pact, but it will be used with flexibility. A socialist commissioner will be in charge
— Valentina Pop (@valentinapop) July 8, 2014

“On the composition of the Commission, we note his statement during our hearing that no portfolio has as yet been attributed to any particular Commissioner or political family, not least the portfolio of economic and monetary affairs  in contrast to what has been reported as having been said to the S&D Group.”

His manifesto argued for reducing energy dependency and ensuring affordability…

“We need to diversify our energy sources, and reduce the energy dependency of several of our Member States… we need to strengthen the share of renewable energies on our continent… It is, at the same time, an industrial policy imperative if we still want to have affordable energy at our disposal in the medium term.”

…while opposing a “rush” towards “new technologies”:

#Juncker tells Greens he’s wary of fracking because “I tend to be cautious even if that’s old-fashioned. I don’t rush into new technologies”
— David Charter (@DavidCharter) July 9, 2014

Juncker comes out against shale gas at Greens hearing. ‘From a personal point of view I’m not in favour of promoting fracking’
— Dave Keating (@DaveKeating) July 9, 2014

He also endorsed EU enlargement to the Western Balkans while coming out against “any specific enlargements” within the next few years.

While his desire to build bridges is commendable, on many key issues he ended up either sitting on the fence or espousing outright contradictory positions. Will the real Jean-Claude Juncker please stand up?