Has the ECB backed German ‘reform contracts’ for the eurozone? 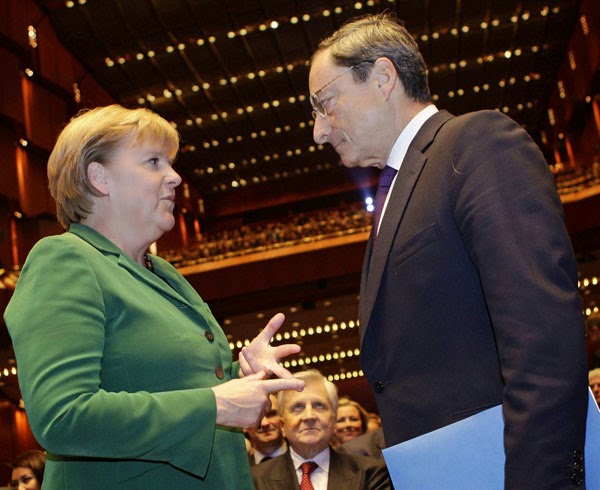 In a speech in London yesterday, ECB President Mario Draghi issued a call for new eurozone rules on structural reform. He discussed it at length in the speech, but the ECB’s summary captures the key points:

The governance of structural reforms deserves as much attention as enforcing fiscal rules and should be done at the euro area level.

Structural reforms need strong domestic ownership since they reach deeply into societal arrangements. But at the same time, the example of the International Monetary Fund shows that there is a convincing case to be made for a supranational body that makes it easier to frame national debates on reform. This can shift the debate from whether to how to implement reforms, Mr Draghi argues.

The outcome of structural reforms – a higher level of productivity and competitiveness – is not merely in a country’s own interest, but in the interest of the monetary union as a whole.

In the euro area, there is therefore a case for establishing rules on structural reform at the EU-level. While a lack of reform can threaten cohesion of the union, the recovery shows us how decisive reform can strengthen it.

Despite the lack of specific details, this has rightly evoked comparisons to the German proposals for ‘reform contracts’, which were strongly pushed last autumn and which we discussed in detail here. There are lots of overlapping ideas, including the concept that eurozone rules will help encourage ownership of reforms rather than discourage it, and that this is a logical supplement to the existing European Semester.

We have always expected the reform contracts to make a comeback in some form or another, not least given Germany’s strong support for the concept, and there are other reasons to think that they may gain some further traction this time around.

While the peripheral countries have previously objected to such sovereignty transfers, Italian Prime Minister Matteo Renzi has been vocally touting the idea that countries should be directly rewarded for reform efforts. The details might differ, but conceptually he has moved closer to the Germans on this point.

There is no doubt the reform contracts will remain a hard political sell, but with the ECB’s backing and the growing desire for a proper negotiation and discussion around the eurozone’s fiscal rules, as well as the broader approach to economic reform, now could be the time for the idea to make a comeback in one form or another.