Juncker: The next Economic and Monetary Affairs Commissioner will be a Socialist 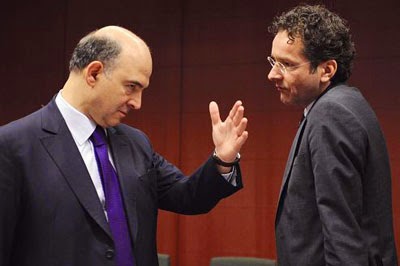 UPDATE (14:15) – One possibility we have not considered in our original blog post is that European Commission portfolios can change. They can be split, broadened, and so forth.

However, at this stage it is quite hard to know whether and how this will happen. Hence, our reasoning is based on the existing portfolios.

Pieces are falling into place with regard to the composition of the next European Commission. Jean-Claude Juncker, who is waiting to be confirmed as new Commission President by MEPs in a vote next Tuesday, has just said that the next EU Commissioner for Economic and Monetary Affairs will be a Socialist.

Given the recent debate over EU fiscal rules and their ‘flexibility’, this sounds like a key pledge from Juncker to secure the backing of centre-left MEPs – since the Economic and Monetary Affairs Commissioner is responsible for enforcing such rules.

Now, two candidates for the post spring to mind instantly: former French Economy Minister Pierre Moscovici and Dutch Finance Minister Jeroen Dijsselbloem, both from their respective countries’ centre-left parties. The decision will likely also depend on what happens to the Presidency of the Eurogroup of eurozone finance ministers – with Spain making no secret of its interest in the job.

This looks very likely to happen if Spain secures the Presidency of the Eurogroup. German Chancellor Angela Merkel would not be keen to see Mediterranean countries holding the posts of ECB President (Italy), Eurogroup President (Spain), and Economic and Monetary Affairs Commissioner (France) at the same time.

This would also mean that France will push to secure another key economic portfolio for Moscovici: Internal Market, Competition or Trade. This would not be ideal from David Cameron’s point of view, although the UK would be likely to get whichever of the bigger briefs France did not get.

This would probably mean that Dijsselbloem will stay as Eurogroup President. At that point, Spain could be ‘compensated’ with an important portfolio in the new Commission. According to the Spanish media, Miguel Arias Cañete – a former centre-right Agriculture Minister who is widely tipped to be appointed Spain’s new Commissioner – would be interested in the Trade brief.

Under this scenario, the UK would possibly have a greater chance of securing the Internal Market or the Competition portfolio (both very relevant, as we explained here) – not least because France would no longer be a contender. That said, as we pointed out above, Germany is probably wary of this scenario. And the UK may well be concerned about France controlling the brief which has the most impact on the issue of the balance of power between euro ‘ins’ and ‘outs’.

One to watch for the UK: Finland’s Jyrki Katainen

One more thing to bear in mind. Until today, former Finnish Prime Minister Jyrki Katainen was seen as a strong candidate to succeed his fellow national Olli Rehn as Economic and Monetary Affairs Commissioner. However, it now seems he will have to go for another portfolio. This could have important implications for the UK. Under a positive scenario, reform-minded Finland along with the UK could secure the Internal Market brief as well as the Competition portfolios. Indeed, France getting the Economic and Monetary Affairs portfolio could increase the chances of this happening.

This is all quite speculative, and based on wishes Juncker expressed during his hearing with the centre-left S&D group in the European Parliament. National governments will play an important role when the time to assign portfolios in the new European Commission comes.

At the moment, there is still a decent chance of the UK securing a good porfolio despite the Juncker débâcle. One thing is clear, though: most other EU countries have already settled on high-profile candidates (note the numerous mentions of both former and acting finance ministers and prime ministers above), while the UK is yet to even decide on a clear shortlist of candidates. It is time to kick it into gear on this front.