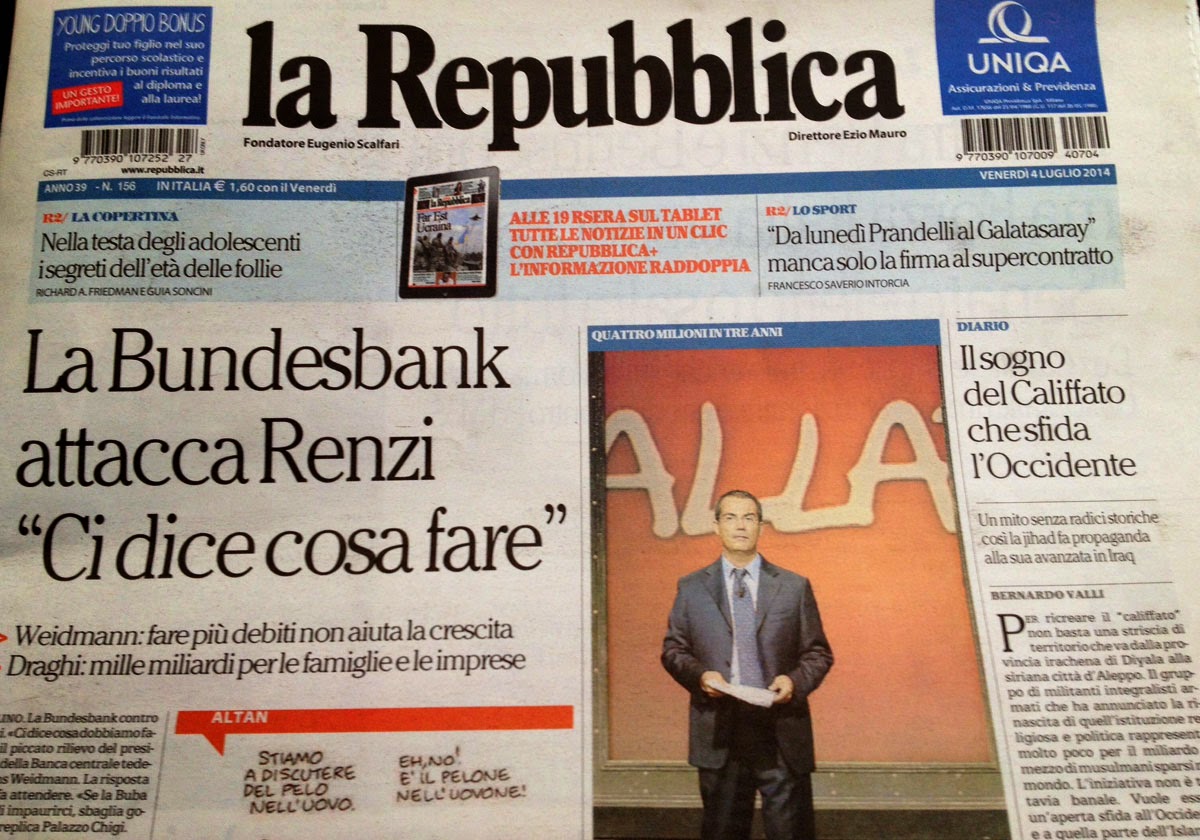 The Bundesbank attacks Renzi: “He tells us what to do”. This is today’s front page headline of Italian daily La Repubblica. According to Italian media, Bundesbank President Jens Weidmann yesterday had a go at Italian Prime Minister Matteo Renzi for telling everyone else in Europe what they have to do.

Well, that’s not quite what Weidmann said. The full speech is available here. And the exact quote is:

Italian Prime Minister Matteo Renzi, for instance, likens the EU to ‘an old, boring aunt, who tells us what we should do.’

In other words, Weidmann was simply quoting Renzi. Quite different from what has been reported by Italian papers, although Weidmann did say in his speech that structural reforms “should be implemented, not only announced” – a Bundesbank Leitmotiv.

A case of ‘lost in translation’. Still, Renzi hit back less than an hour ago during his joint press conference with outgoing European Commission President José Manuel Barroso in Rome:

#Renzi: The task of the Bundesbank is not to take part in the Italian political debate.
— Vincenzo Scarpetta (@LondonerVince) July 4, 2014

Sloppy translations aside, this episode highlights that there are some unresolved issues when it comes to what different eurozone countries mean by the ‘flexibility’ of EU fiscal rules. This may well spice up the European Parliament vote on the appointment of Jean-Claude Juncker as European Commission President, scheduled for 15 July.

A couple of Italian MEPs from Renzi’s Democratic Party have said they want “clarity” from Juncker before supporting him. Similarly, the leader of French Socialist MEPs Pervenche Bérès told French daily Le Monde:

We are in a difficult equation. We criticise the [economic] policies of the right. But if we reject this candidacy, we will have no influence on the re-orientation of the policies that Juncker must pursue.

It is too early to tell how this story will end. Juncker is due to meet the centre-left S&D group on Tuesday precisely to discuss the priorities of the new European Commission. We will probably have a clearer idea after that. Indeed, one would assume that, if Renzi or François Hollande told their MEPs to vote for Juncker, MEPs would follow their leaders’ instruction. Furthermore, the German and Italian governments are both playing down tensions.

That said, looking at the vote on Juncker in the European Parliament, the three groups expected to back him (EPP, S&D and ALDE) have 479 MEPs in total. The UK Labour Party already said it would vote against Juncker. If French, Italian and maybe Spanish centre-left MEPs did the same, along with the 12 Hungarian centre-right MEPs from Prime Minister Viktor Orbán’s Fidesz party (who sit in the EPP group), support for Juncker would suddenly shrink to 389 MEPs.

The required majority is 376, so we would be looking at a much tighter vote. And it’s going to be a secret ballot, which adds to the uncertainty. Time for Juncker to get worried? Maybe not yet, but he has already got a quite difficult job on his hands in pleasing everyone when it comes to using the ‘flexibility’ in the EU’s Stability and Growth Pact to its full extent.