The European Parliament has announced the composition of its Committees, with MEP groups hard at work negotiating the final deals to see who will be Chair and Vice-Chair of the different bodies.

These Committees vary in importance, from the powerful ECON and IMCO committees which deal with Economic and Monetary affairs and the single market respectively – to more niche Committees such as the ‘Petitions’ Committee.

Looking through the lists of MEPs appointed, the first thing that strikes us is that all the Committees are gigantic – the Committee on Foreign Affairs has a ludicrous 71 members (almost 10% of the entire parliament)! It’s not immediately clear why this is, but we can’t help but wonder if the possibility for significant travel abroad is not a factor. But even the more serious Committees are of an unwieldy size – Trade (also with some travel perks) has 41 members, which is perhaps more justifiable as the EP now has a veto over free trade deals. It is worth remembering that under Parkinson’s “coefficient of inefficiency” a committee of more than 20 members is less likely to make good decisions.

Secondly there are some interesting appointments: 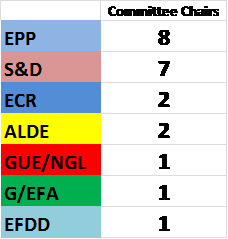 Under the EU’s favoured D’Hondt formula, the different groups are allotted committee chairs according to their relative weights. The ECR group for instance, has secured an additional chair due to its increased size; it has gained Security and Defence on top of its existing Internal Market chair.

However nothing is settled in the EP until you have had the mandatory secret ballot. One potential secret upset could be an attempt to deprive the UKIP/M5S EFDD group of it sole Committee chair – the Petitions committee. Under a secret ballot it is entirely possible for the larger groups to block the EFDD group from chairing a committee.Whether or not you agree with their politics, there is no doubt that they are entitled to such a role, and even the Greens have come out saying as much. Another stitch up here would once again expose a lack of democracy and transparency at the heart of the European Parliament – and surely only play into the hands of those who want to leave the EU.