Is Cameron the greatest pro-European of all EU heads of state and government? 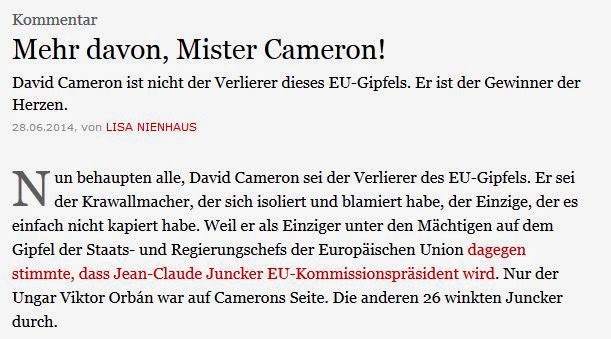 As we’ve noted, the Juncker-hangover is already taking hold in parts of the German commentariat. In a hard-hitting piece, Lisa Nienhaus, the Economics Editor of Frankfurter Allgemeine Sonntagszeitung argues that the EU “needs more Cameron, not less”.

“Hang on a minute, how exactly [was Cameron’s opposition to Juncker] a mistake? He only said publicly what many think. Juncker may well be a jovial, cheerful bloke, but he is also an example of political mediocrity, who represents more of the same, a lack of ideas. Whoever wants to change Europe, and above all the opaque, hyper-bureaucratic European Commission, needs someone else in that post.”

“Cameron did exactly the right thing. He did not only win the hearts of Brits but also of citizens in many other countries who worry about what will ultimately remain of the European Union, a bureaucratic entity that offers occupational therapy and valediction opportunities for veteran politicians. In this sense, Cameron is the greatest pro-European of all the heads of state and government.”

She continues that Juncker did not enjoy a democratic mandate from the German people, and that Angela Merkel made a mistake by backing him:

“The Germans, for example, did not vote for the European People’s Party (of whom Juncker was the leading candidate) but the CDU. Juncker did not feature on the posters, it was Merkel. It is not the case that voters would have driven crazy if Merkel had ultimately arranged that someone else would have become the Commission President. In doing so, she would have shown that she takes this post seriously. Now she has only shown that she doesn’t really care who takes this job.”

As we have been arguing as well, Nienhaus adds that the European Parliament (EP) does not have more democratic legitimacy than the European Council, and the appointment of Juncker is effectively a power grab by the Parliament. She calls on Germans who share this view to support the UK:

“The heads of state and government are ultimately at least as democratically legitimised as the European Parliament. After all, they won national elections in their respective countries.”

“We can only hope that Angela Merkel does not take offence at [Cameron’s] ‘No’. We need the Brits in Europe, also for other reasons. The belief of the Brits that freedom is good for the economy, and that not everything has to be regulated by the state, is exactly that what the EU is currently missing.”

Nienhaus concludes that the UK is vital for the future of the EU, and that the EU debate is missing some of the UK’s beliefs:

“The suspicion among the Brits that the powers that have won want to initiate a redistribution of powers and favour a super-powerful state is widespread. That does not appeal to the liberal Brits. Those in Germany who share this view – and there are many – has to support the UK playing a greater role in the EU. We need more Cameron, not less.”

Neinhaus’s line is not universally accepted in Germany of course. Others have been sticking the boot into Cameron. Nonetheless, Berlin will be aware that last week’s EU summit is a foretaste of what life in the EU could be if the UK were to leave. Without Britain in the EU, Germany would face a bigger risk of being cornered by a block of Southern eurozone countries lead by Italy and France: something that is absolutely not in its long-term interests.