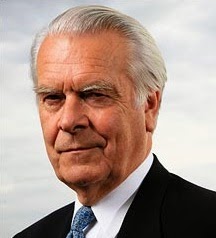 Following reports the the UK government has taken legal advice into the effectiveness of the Luxembourg Compromise – an agreement by which EU states can block EU decisions that threaten a vital national interest. Former Foreign Secretary Lord Owen has written to the Attorney General Dominic Grieve to request the legal advice and argue that as the appointment of Jean-Claude Juncker as Commission President would “increase the power of the European parliament without the prior agreement of the UK parliament” the UK should legislate to ensure that if the same process was used again the UK parliament would “have to agree the appointment.. and in the meantime the Luxembourg Compromise would be automatically invoked in the UK.”

The Following letter from Lord Owen and article explaining why he believes the UK should invoke the Luxembourg Compromise are published by Open Europe. 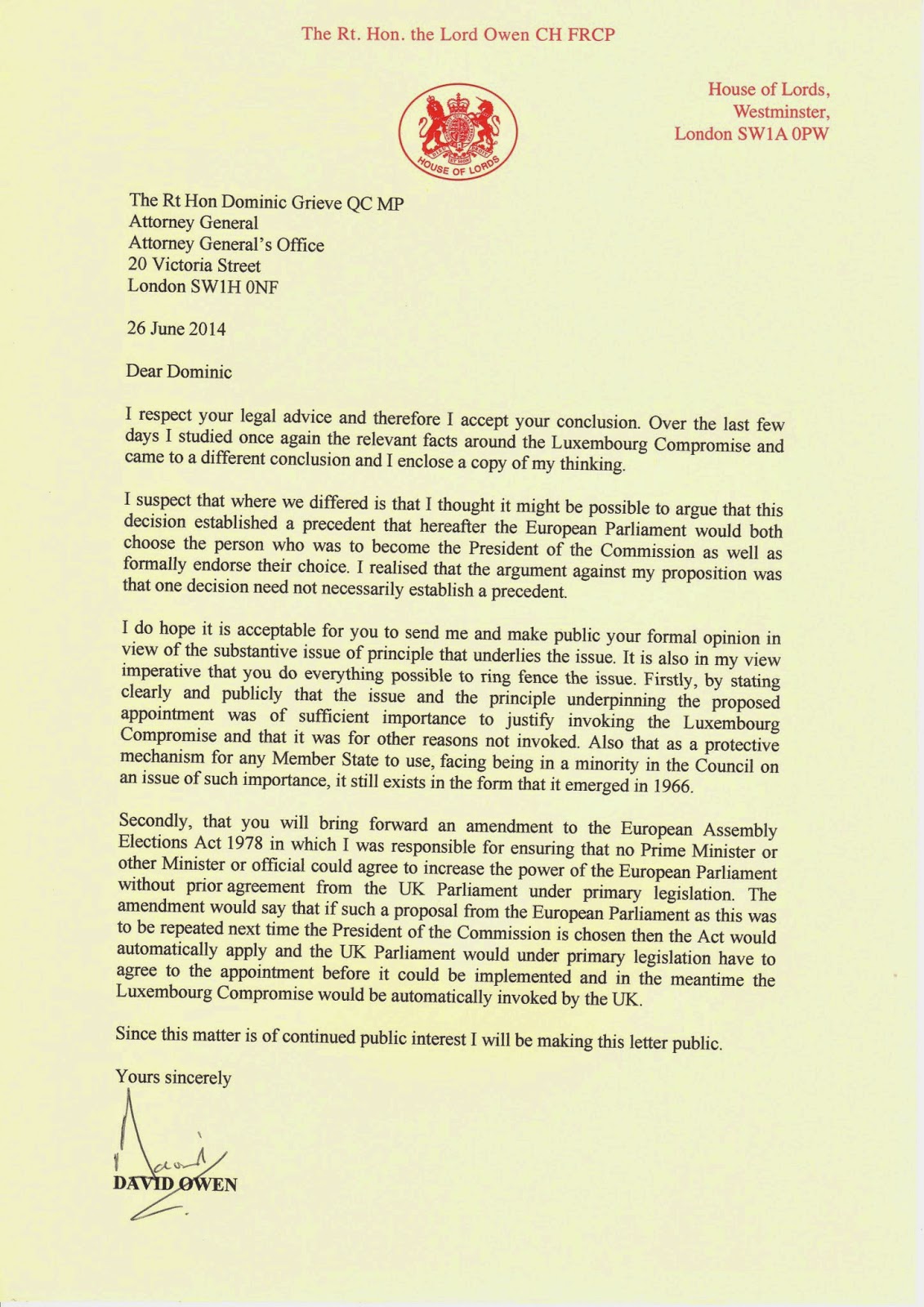 LORD OWEN BELIEVES THE PRIME MINISTER IN BRUSSELS SHOULD INVOKE THE LUXEMBOURG COMPROMISE.

David Cameron is reputed to be considering using the Luxembourg Compromise in the European Council meeting this week. He is not only fully entitled to do so, but the circumstances mirror the situation whereby an arrangement was reached by European Community Member States in January 1966 allowed for a decision requiring majority voting in the Council of Ministers to be postponed until unanimous agreement had been reached. That became known as the Luxembourg Compromise and despite many claims that the Compromise disappeared during the course of 1980s it was reaffirmed in the most explicit way by the then socialist Prime Minister of France, Pierre Béregovoy, to the French National Assembly in the context of a crucial debate on the Maastricht Treaty on 12 May 1992. An English translation of what he said was as follows: “France has never given up and will not give up the right in a serious crisis to protect its fundamental interests. When the application of the majority rule would challenge interests judged vital for one of the states, the mutual commitment remains to continue to seek agreement among themselves.”

The French record in the Assembly le Nationale reads as follows:

Also in his speech he went on to say that any formalisation of the Compromise would “denature” the mutual commitment to seek agreement and render it less effective as a safeguard. Neither the European Commission nor the Court of Justice have ever accepted the Luxembourg Compromise but nor has the European Council ever renounced the existence of the Compromise and their potential use of it.

Neither of these positions are in any way surprising. There is and has been throughout the existence of the European Community, and now the European Union, a fundamental tension between supranational decisions and those taken by the nation states. The invocation of the Luxembourg Compromise saved the European Community in 1966. The Council conclusions stated that if one member state considered that “a very important national interest” was at stake then the Council would endeavour to reach within a reasonable period solutions that could be adopted unanimously. It is often referred to as a vital national interest. But that was not the wording that was used. The French view when very important issues were involved was that “discussions must be continued”, but this was not accepted by the other member states and that difference of opinion was noted and has remained ever since, perhaps because all such disputes have eventually been resolved.

President Hollande, in the light of what happened in France in the recent European Elections, would be playing with fire if he was not to support David Cameron’s right to invoke the Luxembourg Compromise. First and foremost, because it is by any standard “a very important national interest” for the UK. Firstly, because in Article 17 of the Treaty on European Union, it is very clear that members of the Commission “shall neither seek nor take instructions from any government or other institution”. That includes the European Parliament. It is essential that in both substance and in form the President of the Commission is seen to be able to serve the interests of the peoples of Europe, the European Commission and the Europe Council of Heads of Government.

The wording of the Treaty in relation to the choice of the President of the Commission it is claimed by some lacks clarity. The drafter of the words Lord Kerr, who was then Head of the Secretariat established by Giscard d’Estaing to draw up a new Constitution, has rebutted that argument. The procedure for choosing the President, in the words of Professor Alan Dashwood, a Europe-wide acknowledged authority on these matters, and some others, “separates the right of initiative from the right of final decision”, a separation of functions which they rightly claim is characteristic of the Treaty system. The European Council is, therefore, very clearly charged with identifying the individual they consider best suited to be President of the Commission and they are charged with taking “into account the elections to the European Parliament”. The individual heads of government are, therefore, left free to determine what taking into account exactly means. It is pretty clear that David Cameron believes that he should give the greatest weight not to the choice of the largest parliamentary grouping – in this case the one that is chosen as their candidate, Mr Juncker – but also the extraordinarily high vote in many member states for candidates who want substantial changes in or are even doubtful of continuing as members of the European Union. In that choice of priorities there is little doubt that he is supported by the British people and by the majority of Members of Parliament.

But there are other powerful constitutional arguments as well that should, and probably are, guiding the Prime Minister. No British Government is entitled to increase the powers of the European Parliament under Section 6 of the European Assembly Elections Act 1978 until there has been prior approval by an Act of Parliament. Agreeing in the European Council to endorse the choice of the European Parliament could certainly be subject to challenge in Parliament as going beyond the power of the Prime Minister in relation to the Act. He has already made a very substantial change in the British position over the future of the European Union. Ever since the collapse of the Eurozone the coalition government with the support of the official Labour opposition, have made it clear that the UK will not block such steps in the federalisation of the Eurozone that its members wish to take in order to preserve the Eurozone. In order to carry support for that position, which is a constructive one, which is also judged to be in the British national interest, it is imperative that there is no further move towards federalisation of the EU itself affecting non Eurozone members and in particular the UK.

There cannot be any doubt whatever that if Mr Juncker were chosen by majority vote in the present political climate it would be seen as a significant victory for those who believe that a federal union is the ultimate destination of the EU. That view is a legitimate one but is not one that I have ever shared while remaining a committed European. I believed in the validity of the federalist warning by the Labour Leader, Hugh Gaitskell, in a TV broadcast in 1962 and it has been amply justified by the trend of events over the last 52 years. There are today, we know, not just from opinion polls but from votes actually cast in the most recent European Parliamentary Elections, many people who are worried by the federalist direction in the European Union as a whole. If we ignore that sentiment then it will feed on itself. There have been many fine Europeans who have advocated federalism from day one, but the fact is there is nothing in the Treaties, and hopefully there will never be anything in the Treaties, that determines a federalist destiny. The EU is an evolving institution and there are many indications that its citizens want some of the decisions that have been taken in Brussels to be returned to the nation states. There is a widespread feeling that the European Commission has become too federalist and that the true democratic interpretation of the European Elections is that all the institutions, and I include the European Court of Justice, must pay greater regard to this reality in its interpretation of the Treaties. It is in this situation that the existence and invocation of the Luxembourg Compromise is fully justified and were it to be rejected then the British Prime Minister would be bound to take further actions following precedents first established by President de Gaulle, but which have also been followed through by other Presidents and Prime Ministers.