The stakes are raised: Will Renzi and Hollande back Juncker even absent more lenient eurozone fiscal rules? 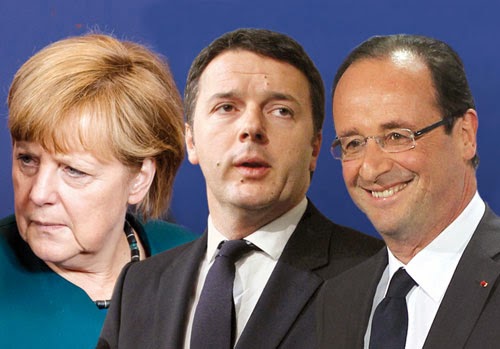 As we anticipated on our blog last week, the discussion over Jean-Claude Juncker’s appointment as next European Commission President has in part turned into a debate over whether the EU’s fiscal rules – enshrined in the Stability and Growth Pact – should be applied in a more ‘flexible’ way.

France and Italy are making their support for Juncker conditional on the new European Commission granting them more budget leeway while they push ahead with structural reforms, and Germany is reluctant to make concessions.

This also matters for David Cameron’s battle against Juncker, as an increasing number of Germans now see what can happen when Britain gets isolated and Berlin is left facing a Mediterranean bloc, armed with Qualified Majority Voting. It may be too late in the day for Merkel to U-turn, but it will definitely serve to focus minds in Berlin following this episode. But could Cameron hold out hope for Italy and France?

Renegotiating the Stability and Growth Pact seems off the table, and neither French President François Hollande nor Italian Prime Minister Matteo Renzi are actively calling for changes to the rules. The key is what each country means by ‘flexibility’. Renzi wants to exclude a number of ‘strategic’ investments from EU deficit calculations. Hollande wants more time to cut France’s deficit. And Merkel wants things to stay just as they are, because she thinks that the existing rules are flexible enough.

As a result, things may just be squaring up for a stand-off at this week’s European Council. German Finance Minister Wolfgang Schäuble told ARD yesterday that he opposes any “re-interpretation” of EU fiscal rules, and added:

“More debt only leads to a deepening of the problems instead of solving them.”

In an interview with La Repubblica, Italian Europe Minister Sandro Gozi hit back:

“It is for [EU] leaders to discuss a new course for Europe. Therefore, we are not concerned about declarations by this or that minister, even if from an important country.”

Meanwhile, Hollande yesterday circulated a paper outlining France’s priorities for the new European Commission. The document, seen by Le Monde, calls for “an application of [EU] budgetary rules that favours investment and growth”, while taking into account “the reforms undertaken by countries and their economic situation”.

However, Merkel doesn’t sound prepared to back down. She told the Bundestag this morning:

“[EU fiscal rules offer] clear guard rails and limits on the one hand, and a lot of instruments allowing flexibility on the other. We must use both just as they have been used in the past.”

If a vote on Juncker eventually takes place at this week’s European Council, Hollande and Renzi will have to abandon their convenient ‘priorities first, names later’ line and make a clear choice. Then the key question will be: do they think they have been given sufficient guarantees that their requests will be taken on board by the next European Commission? If the answer is ‘No’, Juncker’s candidacy could still be struck down.

It is going to be interesting but it’ll take a major turn of events for Juncker to be dropped now.