If you force 26 EU countries to choose between Berlin and London. 26 will choose Berlin. 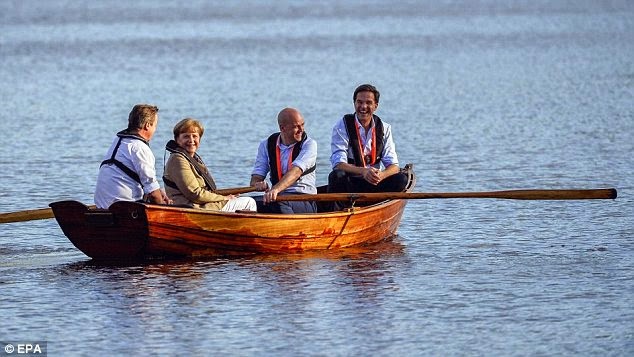 The knife in the battle over the next Commission President has just been twisted a little deeper into David Cameron’s side.

Both Swedish PM Fredrik Reinfeldt and Dutch PM Mark Rutte today announced that they will not seek to block Jean-Claude Juncker for the top post.

Both countries have huge reservations, (Sweden and Hungary were the only two countries to oppose the idea of Spitzenkandidaten from the get-go), but they apparently don’t want to be standing on the wrong side of the fence from Germany.

I’m set on [Juncker. He is] in a position to implement important Dutch wishes.

A slight departure, then, from remarks Rutte made previously, that the Spitzenkandidaten process is “not my preference,” and that he wants to initiate a fundamental debate on it “possibly during the Dutch presidency” over the European Council in 2016.

Under no circumstances, will I make agreements over adapting the fiscal rules, or making them more flexible, in order to make the nomination of a candidate possible.

If Jean Claude Juncker musters a qualified majority amongst heads of state and governments, and also has the support of the European Parliament, well then, the rules set out in the Lisbon Treaty have been followed and Sweden will also join this majority.

Though Reinfeldt doesn’t actually state how he would act in an outright vote, it probably means he will not vote against Juncker.

So that only leaves the Hungarian Prime Minister, Viktor Orban, on ‘Team Cameron’. Orban said “there is no way” he would vote for Juncker, even before the European Parliamentary election.

Absent changes, Cameron is now a long way off a blocking minority to Juncker in the Council. With Italy trading support for Juncker in exchange for more “flexible” EU fiscal policy, and the Netherlands and Sweden dropping out too, Cameron will lose the vote on Friday. This is the grim reality, even though most EU heads of state are far from convinced about Juncker, and of the Spitzekandidaten process itself.

The top line is that if you pit London against Berlin, and ask other EU member states to choose between them, they won’t choose London.

So the trick is to avoid that choice – which in this case was rather difficult. For reasons we’ve explained numerous times, the likely consequence of repeatedly forcing this choice is that the UK will leave the EU. That most certainly isn’t in Berlin’s interest either – or Stockholm’s, or the Hague’s, or Copenhagen’s, or Warsaw’s…