Is Bild having second thoughts about Juncker? 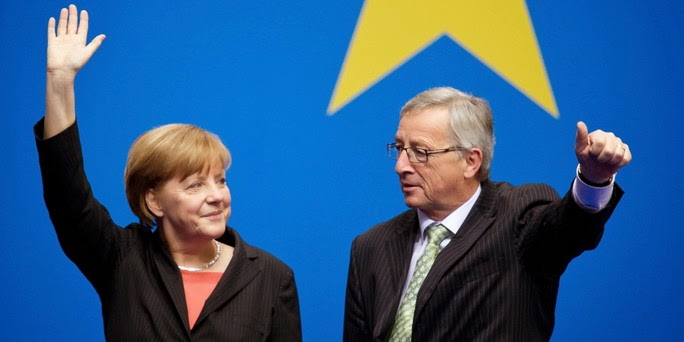 If Angela Merkel had privately hoped to quietly ditch Jean-Claude Juncker after the European election, it all started to go wrong when Axel Springer, the media group that owns Bild, Germany’s and Europe’s biggest selling paper, added its substantial weight to the pro-Juncker/pro-spitzenkandidaten campaign. This severely restricted Merkel’s room for manoeuvre.

While Bild‘s editorial line has not changed explicitly, today’s coverage of the issue is notably less enthusiastic. The paper’s Brussels correspondent Dirk Hoeren asks “Will the Juncker deal be a dirty one?”, with his piece claiming that France and Italy have made their support for Juncker conditional on a relaxation of EU budgetary rules (unlike Cameron who has taken a principled stance).

“that the Southern Europeans will make their vote for Juncker dependent on an agreement on their debt policies shows the shabby extent the haggling over the EU’s chief post has reached.”

“If Merkel supports the election of a euro-softener to the post of Commission President, she will have backed the wrong horse.”

“Jean-Claude Juncker should be warned and be made aware that he must not be a chief at the mercy of Southern Europe.”

If you believe in tight observance of budget rules, as most Germans do, the last thing you want is to have a Commission President, appointed on a ‘pan-European democratic mandate’, who supports relaxing German-inspired rules on budgetary stability and the introduction of eurobonds.

While Juncker might need French and Italian support, ultimately he is the EPP candidate and Merkel is likely to bring her influence to bear. But imagine if ‘centre-left’ parties with a more avowedly Socialist spitzenkandidat were to win in future. How would Germany respond then, particularly the ‘centre-right’? Would it be a case of yes to pan-European democracy, but only if the ‘right’ candidate wins? It seems like some people are starting to wake up to this prospect.