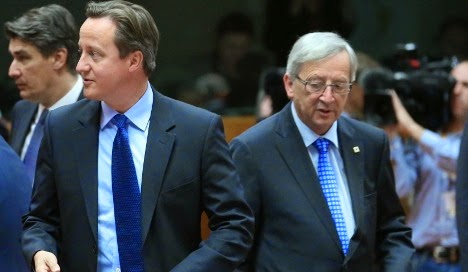 There’s something quite ironic going on in all this Cameron-bashing over Juncker. The charge against Cameron in Europe (and also at home) is often that he lacks principles. That he’s pushed around by backbenchers or pursues narrow tactical personal or national interest.

Now that he has come out fighting for a principle – in this case whether powers should be arbitrarily transferred to Brussels and key decisions made by a fledgling transnational parliament with very limited democratic support, rather than democratically elected national governments and parliaments – he’s being accused of blundering diplomacy.

Yes, of course, Cameron could have done things differently. But if he believes that the principle is wrong, can you blame him for, as he says, fighting “until the end”. In contrast, Angela Merkel – who’s a formidable power politician and who we have a lot of respect for in general – is flip-flopping like crazy over Juncker. And Matteo Renzi, the Italian PM, is busy striking back-room deals to let Italy off the hook on EU budget rules in exchange for backing Juncker.

On this occasion, Cameron wasn’t even pushed around by his own backbenchers. In fact, Better Off Outers would probably love to see Juncker become President as it’ll strengthen their cause. Also, some sceptics see this as a “pointless battle.” So, Cameron seems to be taking a genuinely principled stance even if it comes with a political price.

In a sense, one could argue that, rather than the Spitzenkandidaten process falling victim to British politics, Cameron has fallen victim to German domestic politics.

“We should thank David Cameron,” because, “at least we know where he stands – not only regarding Juncker – but also on the future direction of the EU. We still don’t know where the German Chancellor stands… But at some point she will have to decide, if, and how much, play-room she wants to give her British friend.”

So did a former judge at the German Constitutional Court, Udo di Fabio, who wrote last week in FAZ:

“Those who resent the British Prime Minister for having an opinion on personnel-related issues did not understand the system. Those who demand the British exit or approvingly accept it because the UK does not want to follow rules which are not to be found in the [EU] treaties want a different Europe than what is laid down in the treaties.”

“More centralisation in some areas is possible, but one has to soberly discuss the repatriation or a better separation of powers in areas such as labour and social law. Relevant proposals from the Netherlands or the UK should not be immediately viewed suspiciously as re-nationalisation programmes.”